Last month, the finalists for the 2017 Ngaio Marsh Awards were revealed, with the winners to be announced at an event in Christchurch, the birthplace of Dame Ngaio Marsh, in late October.

Named after the Queen of Crime who came from the edge of the British Empire, since 2010 the Ngaio Marsh Awards have celebrated the best crime writing by New Zealand authors. This year, for the first time, those celebrations include non-fiction writing as well as fictional crime tales.

Today on Euro Crime, as part of the Ngaio Marsh Awards blog tour, we’re hosting an interview with Lucy Sussex, author of Blockbuster!: Fergus Hume and the Mystery of a Hansom Cab.

Unlike her fellow finalists for the new Ngaio Marsh Award for Best Non Fiction, Sussex hasn’t written a true crime tale; instead her book delves into the strange tale of mystery writing’s first runaway global hit (the best-selling crime novel of the entire nineteenth century), and its unusual author.

The Mystery of a Hansom Cab by Fergus Hume (1886) was a word-of-mouth literary sensation with Victorian-era readers that helped popularise the nascent genre and paved the way for the success of the likes of Sherlock Holmes, and then the Queens of Crime in the early twentieth century.

After several reprints sold out in Australia, it was released in England. It sold half a million copies and the Illustrated London News reported at the time that people were found everywhere, travelling by road, rail, and river, “eagerly devouring the realistic sensational tale of Melbourne social life”.

The fact it was a self-published debut was remarkable enough, but as Sussex uncovered, the story behind The Mystery of the Hansom Cab and its author Fergus Hume is stranger than fiction.


AN INTERVIEW WITH LUCY SUSSEX

What inspired you to research the story behind Fergus Hume's bestselling if somewhat forgotten or overlooked 1886 novel in such depth and write your book Blockbuster?

I was working with Meg Tasker at Federation University on a research project about Australian and New Zealand writers and journalists in London at the turn of the last century. It ranged from very well known figures like Henry Lawson, to lesser-knowns like poet Arthur Adams and Kate Evelyn Isitt.

So of course we had a file on Hume, who moved to England in 1888, in the wake of Hansom Cab’s success. We were indexing all sorts of periodicals, just ahead of the boom in digitising newspapers. More and more sources were coming online as we worked. So one morning in my office at La Trobe University — when I probably should have been doing other things — I idly started following Hume, chasing the leads from paper to paper, back and forth across the Tasman. By lunch I knew there was enough material for a book on the Hansom Cab alone, and I could even see the form of it, too.

Before you began this project, what did you know about The Mystery of the Hansom Cab? How did your perspective on the novel change (if at all) during the course of your research?

When I grew up in Christchurch, everybody knew about Ngaio Marsh, but I never heard of Hume. In fact I didn’t know about Hansom Cab until I worked as a researcher for crime fiction historian Professor Stephen Knight, who did several Hume editions.

I read it then, and learnt about its success. Quite how important a book it was I came to understand in the course of this research. It was the best-selling detective novel of the 1800s. The success of Hansom Cab helped consolidate the emerging publishing genre of detective fiction, as well as drawing attention to the potential of Antipodean writers.

Given Hume’s debut was published more than 125 years ago, how did you go about researching Blockbuster? Was it all based on records and documents, or were you able to speak to descendants of Hume or others who knew him?

Hume never married, had no descendants, though distant relatives do exist. Researchers have interviewed them, so we know about his fascination with reincarnation, that he believed in a former life that he’d been guillotined in the French Revolution (and could remember it!).

I mainly used archives. The problem with Hume is that he left no diaries, there are few letters and the most relevant publishers’ records do not survive. David Green, Trischler family historian, kindly gave me a lot of information about Fred Trischler, Hume’s brilliant publisher. Rowan Gibbs, Hume’s NZ bibliographer, was an endless help. But mostly the interviews I conducted were more about Hansom Cab than its author. In this sense Blockbuster is the biography of a book rather than of Hume.

Even with written sources I had more than enough material. As the book was going to press ever more digitised detail was going online. It was very hard to stop researching Blockbuster. One fact just too late to include was that one of the three lost silent film versions of Hansom Cab was by Eliot Stannard, who went on to work with Alfred Hitchcock. 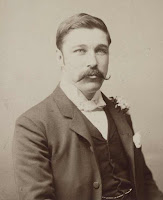 What were some of the most surprising revelations you gathered about Hume, Melbourne at the time, or the publication and popularity of the book, during your research?

Well, people kept asking me if he was gay, which meant I had to look into the question...

I do think Hume was same-sex identified, and it shows in the novels. But in 1895 the Oscar Wilde trial happened, which meant caution, or else celibacy. There is one incident which suggests he was being blackmailed. He was also highly religious, a Theosophist. His personal life ultimately remains a mystery.

Another insight was how successful the book was in Australasia —could it really have sold out a then and now huge first edition of 5,000 copies in several weeks? All the modern publishers said yes, the book historians tended to say no. But with a high level of literacy, an existing demand for detective fiction, and some really clever marketing—like Hume delivering copies to bookshops in a Hansom Cab, then driving around the suburbs as an advertisement—it did look increasingly possible.

Have you read any of Hume's later novels? Why do you think they didn't have much success?

Hansom Cab was a good crime novel, the next, Madame Midas, a good novel which transcends genre. When he got to London, Hume thought his success with the novel would ensure he achieved his ambition to be a dramatist. His follow up novels are hasty and not very reprintable, and he spent a lot of time trying to establish himself in other areas, such as children’s fiction, futuristic, and utopian fiction. Really, he was best fitted to be a crime novelist, with his legal training, and ear for dialogue and description. He wrote some very fine detective novels in the 1890s and 1900s, but they weren’t as popular. By that stage other writers were leading the field, such as Conan Doyle.

From what you've researched, how did Hume feel about the stunning success of his debut novel (more than a million copies sold in UK and USA), for which he got little financial reward?

He wasn’t expecting it, but as a fortune-teller told him, he did wake up one day and found himself an international sensation. What he resented was being typecast as a writer of ‘shilling-shockers’, popular trash. He was better than that, and knew it. But he couldn’t escape the label, and it gave him a living from writing, rather than the law, which he hated. At the end of his life he believed it was karma, his fate. He died hopeful of better luck in the next life.

Why do you think the novel was such a sensation, devoured by so many readers in several countries in the 1880s?

Hume had consulted booksellers, found what was selling—the French writer Gaboriau’s detective novels—and set out to adapt them to the colonial setting. It was his first attempt at writing crime, but he took it very seriously, working out the plot carefully, rewriting when he found the criminal too obvious. He also understood that the setting, boomtown Melbourne, was as important as a character to crime fiction. As a result he got it absolutely right on his first attempt, which very few authors do.

For you, what is special about The Mystery of a Hansom Cab? What makes it still readable 125 years later?

It draws you in, keeps you reading. It is also a vivid picture of a 19th-century city, its highs and lows, from society parties to the slums and opium dens. Not least, a modern crime reader can still be surprised by the narrative, the whodunit not guessable even after over a century.

Many thanks to Lucy Sussex for stopping by and to Craig Sisterson for arranging it.

Do check out the other stops on this month-long tour: 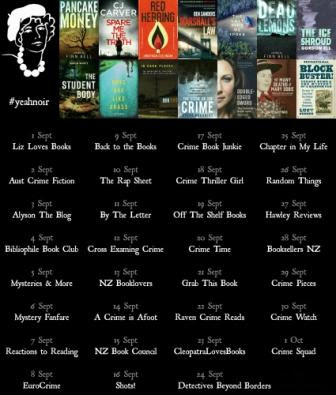