Review: A Meditation on Murder by Robert Thorogood 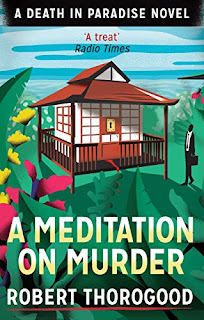 Death in Paradise is a successful BBC series in which a British police detective inspector has been sent to run the small police department on the Caribbean island of St Marie. Each week there is another baffling murder case to solve and each episode concludes with all the suspects gathered together in true Poirot-style fashion.

I'm a huge fan of this cosy series which will return to the television with a third iteration of the British Inspector, however A MEDITATION ON MURDER returns to the original DI, Richard Poole. Richard is as strait-laced as they come and wears a suit and tie in the oppressive heat and does not enjoy island life at all and especially sharing his beach-side cabin with a lizard, called Harry.

Richard and his team of Camille, Fidel and Dwayne are summoned to The Retreat as the co-owner, the self-styled Spiritual Guru Aslan, has been found dead in the Meditation Space, a Japanese building with thick paper walls. Five of Aslan's students were locked in the building with him and one, Julia, immediately confesses to Aslan's murder.

Richard is unconvinced that Julia is the guilty party and so the team continue to investigate Aslan and the five guests. Information is slowly uncovered about Aslan and some surprising connections to his guests mean that everyone had a motive to kill him.

As with the tv series, there is lots of recapping – going over “what do we know so far” but we do get to know a little more about Richard and he has a couple of escapades which wouldn't make it to the tv screen in the time limit of a one hour show.

I enjoyed this outing and will read the other two books currently available (with a fourth due in May December 2018). I should say that the author, Robert Thorogood, is the creator of the show, so who better to write these unseen episodes. If you enjoy traditional mysteries and haven't seen the show or if you are a fan of the show then give this one a try.