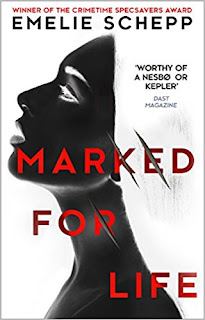 The seven-year-old girl sat in the corner. She pulled at her mama’s skirt and put it over her mouth. She imagined that she was at home in her bed, or rocking in a cradle when the ship rolled in the waves.

Norrköping, Sweden.
When Detective Chief Inspector Levin and Detective Mia Bolander arrive at the house in Östanvägen, an ambulance is in the drive and forensics are already working the scene. In the living room lies the body of a man, Hans Juhlén, head of asylum issues at the Migration Board. His wife found him when she returned from her walk. He had been shot. There are no signs of a struggle but Mrs Juhlén says that a window had been open and she had closed it. Whilst Levin continues to ask the weeping woman questions, the forensics officer dusts the window sill for prints and finds two – the hand prints of a child.

Prosecutor Jana Berzelius promptly leaves the courtroom after the trial verdict. As usual she ignores the waiting journalists and makes her way to the garage. Her cell phone vibrates and she answers her father’s call. He asks how the case went and if she will be coming to the family dinner on the first of May. She accepts the invitation; neutral respect is always the tone of Jana’s and her parents’ conversations. However the next call is not from her mother as she expects but from the Chief Public Prosecutor. An important Migration Board official has been murdered and he wants Jana to assist with the investigation. She drives straight to police headquarters and finds the investigating team already gathered in the conference room. It is clear that detective Mia Bolander is not pleased to see that Jana Berzelius is in charge. Mia dislikes and distrusts her, views her as stiff, upper-class, arrogant and with no idea of how to let her hair down. But Mia seems to be alone in her hostility as the team gets down to work and discusses the time line and crime scene: Mrs Juhlén is a person of interest, a pack of threatening blackmail letters was found in the victim’s wardrobe, the murder weapon hasn’t been found, nor are there any children or grandchildren in the family to explain the child’s prints on the window sill.

In another time and place a young girl huddles with her family and others in a crowded metal container which pitches and rolls with the movement of the ship. She plays her fingers along the steel wall, making them gallop like a horse, but this time Mama doesn’t laugh. Lots of people are crammed into this dark, airless, stinking, space. The little girl knows some of them, some of the children especially. Her galloping fingers find a metal plate on the wall. In the darkness she can just make out letters … V … P and what her mother tells her is an X... O and then some numbers. She counts them. Six numbers...

The strength of Emelie Schepp’s dark crime story about people trafficking is its strong plot centred on prosecutor Jana Berzelius, a clever, elegant and successful woman but a woman with a secret, hidden from even herself until the body of a murdered boy is found. A scarred name marks the back of the child’s neck. Jana too has scars on the back of her neck. Soon her ever-present nightmares begin to change, becoming flashbacks which set her in pursuit of the boy’s killer in tandem with the police investigation – but for reasons of her own.

The story of MARKED FOR LIFE is strong and striking and begs to be filmed. Perhaps that’s what its author might have hoped for – for I found the actual writing flawed. Odd turns of phrase and grammar sat badly with me, sometimes even getting in the way of the action. No translator is credited with this English language version. The characterisation is also thin, with the exception of Jana herself and her distorted mirror image, the unlikeable police detective Mia Bolander who looms large. I ended up feeling as though I was viewing a dark and fascinating story through an equally dark glass.

Emelie Schepp’s début novel, MARKED FOR LIFE started out as self-published. It would have been good if a sympathetic editor had taken it under their wing. However it has attracted favourable community reviews and Swedish 2016 Specsavers Crime Time Reader’s Prize. For fans, the good news is that Emelie Schepp has written a further two novels in her Jana Berzelius series which are due to be published over the next two years.

I remain some kind of grouch in saying that, for me, this novel was an uneven read except for its original and absorbing plot.