Review: Did You See Melody? by Sophie Hannah 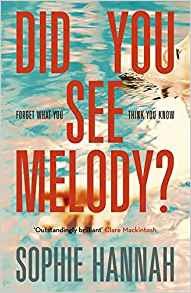 Cara Burrows, married with two teenage children and living in Hertford, England has flown out to Arizona, USA and has booked into a high class resort. Cara is pregnant and neither her husband Patrick nor Jess her daughter or Olly her son are keen that she keeps the baby. She is hoping that sometime away will make her situation clearer.

Arriving at the five star Swallowtail resort and spa in the foothills of the Camelback Mountains, Cara is exhausted from the journey. After checking in she uses her key to access the room and finds a man and a teenage girl occupying it. Traumatised at the man's aggressive attitude, she goes back to reception, where an apologetic receptionist upgrades her to a casita complete with infinity pool. The following morning she overhears a guest – a Mrs McNair telling the receptionist about sighting a missing girl – Melody. She disappeared seven years ago and her parents are serving a prison sentence for killing her. Accessing the internet Cara learns that Melody had a favourite cuddly toy named Poggy (a cross between a pig and a dog) and she realises that the young girl in the hotel bedroom had a similar toy. From a photograph and allowing for the time difference Cara is convinced this is the missing girl.

Aided by two American guests at the resort Tarin Fry and her daughter Zellie they investigate. They find that a lawyer who has a TV show – Bonnie Juno made the accusations about the parents. How dangerous are the people who have Melody? And is the girl the real Melody? What about Cara's thinking time about the impending arrival?

This is an unusual book by an experienced author. I found it entertaining if at times a bit confusing. However I would recommend as a good read.