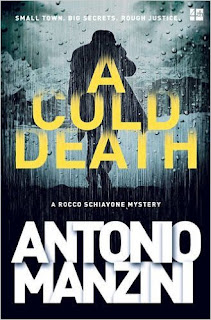 Friday, March 16th, Aosta, Northern Italy.
Rain, then snow, mountains swathed in cloud. A wind rattles the No Parking signs in Via Brocherel as Irina rounds the corner. Its icy slap doesn’t bother Belarus-born Irina. She is thinking about her Italian breakfast of coffee and brioche and how different it is from the barley gruel and muddy coffee back home. Her partner Ahmed won’t believe that her father sucks lumps of butter as a treat. She loves Ahmed, the Egyptian who smells of the apples he sells on his stall.

She reaches the apartment building (so unlike the block where she and Ahmed live with Ahmed’s sullen eighteen-year-old son Hilmi) and gets out her keys. The apartment door unlocks too easily, not double-locked. Irina calls out her employer’s name as she walks through to the sitting room which is a mess – with the remains of a meal, wine glasses, a slept-in blanket on the sofa. None of this is right. Gathering up the glasses, Irina walks through to the kitchen. Drawers and cupboards have been flung open, kitchen equipment and cutlery strewn everywhere. She rushes to the bedroom. It’s empty, the bed unmade. Turning quickly, she steps on a shattered cell phone. “Burglars!” she yells, falling badly in her struggle to get out of the apartment. She bangs on all of the neighbours’ doors in turn but gets no response. The street too seems deserted. Until she spots an elderly man with a tiny dog on a leash. She limps towards retired Warrant Officer Rastelli who stares at the dishevelled woman with the bloodied knee. Her mouth opens and closes and he switches his hearing aid back on; he always turns it off when he walks Flipper, the little mutt yaps all the time. The woman is distraught and yelling about burglars. Rastelli falls back on habit. He stands to attention and waits.

Deputy Police Chief Rocco Schiavone gets up with his alarm, opens the curtains and stares at the grey sky. No sun, no surprise. He sighs and begins his working day ritual of cell phone off, breakfast in the café, an early morning joint. Only then, will he turn his phone on and start the working day. There is a text from his girlfriend Nora. Which reminds him that today is her birthday and that the list of gifts she doesn’t want is long and specific. Rocco’s gloomy thoughts are interrupted by his assistant Caterina Rispoli. Amongst other things she says there are reports of drug dealing around the railway station. And Rocco has a brainwave which allows him to get rid of two birds with one stone. Two birds, two idiots: D’Intino and Deruta. He orders the pair to stake out the park near the station each night, starting straight away. Never mind that Deruta helps out his wife at her bakery at night – he’ll just have to help her during the day. With two liabilities off his hands, Rocco is just asking Caterina’s advice on a birthday gift for Nora when the news comes through of a burglary on Via Brocherel.

At the crime scene together with Officer Pieron, Rocco works the apartment’s lock open with his Swiss Army knife. Irina, the cleaning woman, says every room is a mess. Just one door remains closed, at the end of the hall. They open it. Darkness. A smell that tells Rocco that something is very wrong. He switches on the light which immediately shorts out. The room is pitch black again. But what he sees in that brief moment of light is enough for him to call the Medical Examiner. A woman hangs by a cord from the light hook, her head slumped onto her chest…

I was unsure about the writing as I began A COLD DEATH, the second Rocco Schiavone mystery to be translated into English. At first its descriptions seemed florid – but I can be a hard-boiled girl sometimes. And it was a short adjustment. I soon settled in, enjoying the pace and story-telling of this murder investigation hiding in the skirts of a suicide. The dialogue flows well; crackling and capturing that subtle thing – a tongue in cheek remark that we need to read as such. Perhaps Manzini’s skill with dialogue owes something to his career as an actor and director. The star is Schiavone himself. If you accept his profanities and fury, you can quickly get to like Rocco Schiavone. In Rome he grew up with the bad boys before becoming a successful policeman. Now he is exiled to the frozen wastes of Aosta, as he sees it, after his temper got the better of a well-connected suspect and his own career. He misses Rome, he hates the cold, and despite an eye for a pretty woman he will be forever “married” to his wife Marina, a dead woman with whom he talks in the privacy of his own home. And just to cap off his search for justice in A COLD DEATH, that well-connected suspect crops up again. An atmospheric, fast-paced read, this story has character and characters enough to keep you coming back for what I hope will be another slice of the series.