Review: Miss Treadway & the Field of Stars by Miranda Emmerson 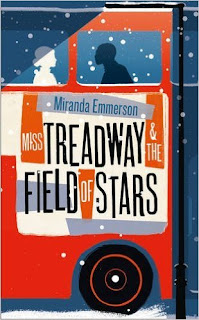 Anna Treadwell is a dresser in a West End theatre in 1960s London. She has become friends with the star of the play The Field of Stars, the American film star Iolanthe (Lanny) Green. Lanny, like many theatricals, can be hard work, but the two women get on well, so it comes as a shock to Anna when Lanny disappears.

The theatre manager Leonard Fleet hopes that Anna can help in finding the missing star, otherwise the play will be cancelled. Leonard is also Anna's landlord, she lives in a small apartment on Neal Street in the centre of the city. The police question Anna and other members of the theatre team, but soon have other problems to deal with. They appoint Detective Sergeant Hayes to find what has happened to Lanny.

Anna feels that there is no sense of urgency in the investigation into locating the missing star, despite the fact that she could be dead and so she decides to investigate. She knows that Lanny has been seen in some unsavoury night clubs in town. She finds an unlikely ally in Aloysius an accountant who works for the clubs. Together they follow leads.

Anna however has secrets of her own. She is also helped by her one-time employer, Turkish cafe owner Ottmar Alabora, who also has the problem of his eldest daughter Samira who is causing his wife Elkin much heartache. Sergeant Hayes also has problems, he is very proud of his young daughter Gracie, but his wife Orla is dissatisfied with married life. Through a journalist who interviewed Lanny, Hayes learns that Lanny had a younger brother Nathaniel who was killed in wartime according to Lanny, but why does she have a bank account in his name? And who is Maria Green?

The author has captured the period well and we follow Anna and Aloysius as they try to find Lanny, with the police becoming increasingly frustrated with their meddling. I enjoyed following Anna's investigations. I would have liked to find out more about her past and how her relationship with Aloysius progressed. The author is a travel writer and writes also for the BBC. This is her first work of fiction. Recommended.