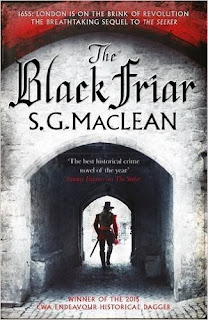 This is the second book in the series featuring Captain Damian Seeker, a soldier in the army of Oliver Cromwell, newly appointed the Protector of England.

One of the spies in the employ of Oliver Cromwell's secret service has been found dressed as a Black Friar and walled up - alive - in a church. Seeker is tasked with solving his murder and also finding the sensitive information he was tracking. Seeker is well known in London for his uncompromising belief in Oliver Cromwell and he is feared for his relentless searching out of Royalists and other enemies of the new State.

There is concern that someone in the department is working against the Protectorate, so Thurlow, Seeker's superior, asks him to search out the truth quietly and discretely. One of the suspects is Lady Winter, a known Royalist, who coincidently asks Seeker's help in finding a young servant girl, Charity, who has disappeared. Seeker discovers that Charity is not the only young and attractive person who has recently disappeared. He finds that both the Royalist factions and former Cromwell supporters who believe that his reforms have not gone far enough are plotting against the Protectorate and his investigations of the murdered spy and the missing young people start to have strands in common.

I really enjoyed this book. It is an interesting period of English history and one I knew only the basics about. I found that the background given about Cromwell's followers, who felt he was too tolerant and wanted to bring him down and impose a much more fervent religious belief system on the country, seemed particularly relevant today.

For anyone who enjoys reading historical crime - particularly the C J Sansom series featuring Shardlake - I am sure they will enjoy this. There is the same depth of knowledge of period through the book which gives the right level of historical background without slowing the story down.

Fascinating thanks for bringing this to my attention :)