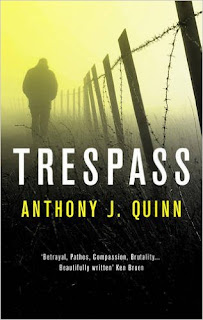 Although it had been decades since he had last seen the girl, the memories of that night had never quite left him, the sound of her stressed breathing gulping at the hood, and the frail thump of her fists battering the car window as they drove her away...

Border Country, Northern Ireland, late winter.
Samuel Reid has felt a growing sense of foreboding for months. This anxiety brings with it vivid dreams which keep him sleepless. His fears become more concrete when travellers set up camp in a field bordering his farm. The site grows larger and more chaotic. It obsesses Reid along with the idea that the travellers are smuggling tobacco across the border. He contacts the local authorities but the travellers own the land and there are no grounds for their eviction. One night, a man emerges from the shadows of Reid’s farmyard. He says he is a journalist and asks Reid about a young traveller woman who had been working at some of the local farms during the mid-1970s when she disappeared. He shows Reid a photograph of her holding a baby and another of a group of young men in uniform. The uniforms are the same as the one hanging in Reid’s own wardrobe and amongst the young men in the photograph stands Reid’s own brother. Angry, Reid pushes the journalist out, spotting a traveller van at the entrance to his yard as he does so. The van flashes its lights. The journalist leaves with a vague threat and heads towards the van.
Inspector Celcius Daly is under investigation at work for his possible involvement in the disappearance of an old spy during his last investigation. The case concerned a notorious Murder Triangle of the 1970s and it left its mark on Daly for another reason – it had included the murder of his own mother. A solitary and isolated man, Daly is currently excluded still further, left swinging his heels on court duty which means standing in for detectives unable to attend proceedings. During one courthouse session his isolation is broken by a woman solicitor who asks for his help. Celcius is nonplussed to find she simply wants him to hold her client’s baby whilst they attend a hearing but he goes ahead and does so. However the next time that this same young solicitor asks Daly for his help is different. Her ten-year-old son has disappeared from her car whilst she delivered some papers to the court. Daly steps in to organise a search and collect potential witness statements. Gradually it appears as though the boy may have gone with his abductors willingly. Why? Who are they? And if he went willingly – where is he now?

In his Celcius Daly crime novels, Tyrone-born Quinn stakes out two landscapes. The first is that of the dilapidated fields, cottages and blackthorn hedges of rural Northern Ireland full of falling rain and winding tracks which disappear into the darkness of forest and bog-land. His second “landscape” is that of the human ghosts and tragedies behind certain deaths and disappearances in such isolated rural communities. TRESPASS is his fourth Daly novel and it opens with the seemingly contemporary theme of child abduction. But it carries a parallel mystery: the disappearance of a young traveller woman decades before. In investigating both mysteries, Quinn is drawn into the lives and fates of Traveller people both now and during the political disturbances of the Troubles; Daly the outsider is drawn into the lives of these other Outsiders.

In the beginning Quinn’s characteristically atmospheric writing almost steals the pace of his story as he writes about Daly himself, his cross-roads isolation, his life at work and at his run-down cottage on the shores of Lough Neagh. But I am quibbling. Because such atmospheric writing also builds suspense and menace in a way that catches me up and has me reluctant to turn the page but sure to do so. And my reluctance is not the dread of brutal violence but a dread of supernatural horror which Quinn brings to his version of Emerald Noir. Once the way of the world and its crime plot is established, Quinn speeds up the pace to such an extent that I chase on through, the straightforwardness of the ending taking me by surprise and leaving me asking questions about the characters that only another book can answer – if it does.

I have enjoyed all of Quinn’s Celcius Daly books, including TRESPASS. Raymond Chandler wrote a famous sentence about the mean streets and the investigator. Well, Daly may not walk down “mean streets” exactly but he is certainly an “unusual” man and a man of “honor”. Long may he and his Gothic setting survive.