Review: A Dreadful Past by Peter Turnbull 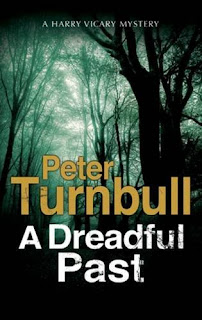 Noel Middleton recognises a vase in the window of a small antique shop in York. The vase had been broken by him and his mother glued it back together. It had belonged to his family and twenty years ago his parents and his blind sister had been murdered and the vase was amongst items stolen at the time.

Middleton reports the facts to the police. Detective Chief Inspector George Hennessey decides to re-open the cold case. Hennessey's team is led by Detective Sergeant Somerled Yellich and includes Reg Webster, Thompson Ventnor and Carmen Pharoah. The team begin to investigate who has owned the vase since the murder and burglary. Hennessey goes to see the DI who worked on the case, now retired – Frank Jenny. They also re-interview Mrs. Anne Graham who cleaned the Middleton house once a week.

As the police team gather the evidence, it is apparent that this is not an isolated incident, but one of several and that four people were involved. The identity of two of the murderers comes as a complete surprise, but after all this time can they get the evidence to convict?

This is the twenty-fourth book in the “Hennessey and Yellich” series. The author has also written five books in a separate “Harry Vicary” series. I've not read anything by this author before, the style is unusual and it's difficult to place what year it is supposed to be. From the style I thought at first it was either pre-Second World War or early 1950s. However CCTV cameras are in evidence, so it must be fairly recent. Once you get used to the “dear reader” style it is an easy rewarding read. I would definitely recommend.