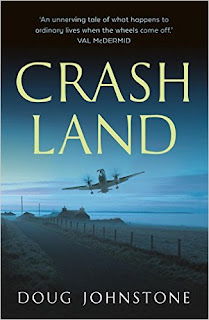 The briefest glimpse of the rather eye-catching cover on the front of Doug Johnstone’s latest novel lets you know that you are in for another corking treat. Following what seems to have become the trademark Johnstone style, the story opens with a stressful situation and rapidly goes downhill from there. The ensuing roller-coaster journey that you are taken on leaves you feeling somewhat dishevelled when you are finally spat out the other end. At times the flow of the writing in this book has an almost lacklustre feel to it that I initially found to be rather disappointing, as it wasn’t the high-octane stuff that I was expecting. However, upon reflection, the main character’s own frustration at the situation is cleverly mirrored in the way these parts of the book are written; such that the reader feels as impatient as the protagonist at the way things are turning out.

As its title suggests, this book is about a plane crash. In fact, it starts with the plane crash and the infuriating, machismo-driven, fight that causes it is maddening. You feel helpless to stop the plane from crashing and are forced to live the experience, in a dream-like slow motion, with Finn – who just wants to get home, from Orkney, for Christmas and could really do without the hassle. Unlike nearly everyone else on the plane, he survives the impact but when the beautiful woman he has been defending grabs her bag and leaves the crash site you get the sinking feeling that this isn’t going to end well.

And you will be right about that.

Pretty soon Finn is helping the police with their enquiries but they get the distinct impression that he isn’t telling them the whole truth. Forbidden from leaving the island and potentially about to be charged with causing the crash, Finn goes back to his gran’s house to cool his heels. Then he receives a text message and sets out on a course of action that soon gets him even further into trouble…

Johnstone’s books never fail to disappoint. He has this uncanny knack of making the reader feel helpless, along with the main character, and leaves you watching in dismay as the unfolding events just make matters worse and worse. If you like a cracking good story that you know will definitely not have a warm and fuzzy “Happy Ever After” ending, then CRASH LAND is just the book for you!