Review: By Gaslight by Steven Price 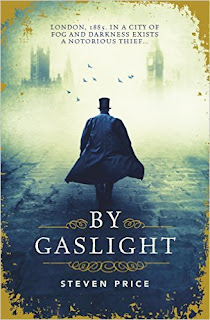 London, 1885. A woman’s body is discovered on Edgware Road; ten miles away, her head is dredged from the dark, muddy waters of the Thames. Famed detective William Pinkerton had one lead to the notorious thief Edward Shade, and now that lead is unfortunately dead. Determined to drag Shade out of the shadows, Pinkerton descends into the seedy underworld of Victorian London, with its gas-lit streets, opium dens, sewers and séance halls, its underworld of spies, blackmailers, cultists, petty thieves and pitiless murderers.

Adam Foole is a gentleman without a past, haunted by a love affair ten years gone. Returning to London in search of his lost beloved, his journey brings him face-to-face with Pinkerton, and what he learns of his lover’s fate will force him to confront a past - and a grief - he thought long buried.

Epic in scope, brilliantly conceived and vividly atmospheric, "By Gaslight" is a riveting literary historical crime thriller portrait of two men on the brink. Shrouded in secrets, betrayals and deceptions, this is the story of the most unlikely of bonds: between William Pinkerton, the greatest detective of his age, and Adam Foole, the one man who may hold the key to finding Edward Shade.

The identity of the woman found in various body parts in the Thames is thought to be Charlotte Reckitt and she was a lover of Edward Shade a man that Pinkerton has been hunting for many years since his father Allan Pinkerton used him as an agent in his secret service during the American Civil War.

The book alternates between the back story of the various members of the Pinkerton family and the founding of their detective agency in Chicago in the 1850s by Allan Pinkeron, who was originally born in Glasgow. It details his work during the Civil War and his recruiting of Edward Shade whom he is very close to, almost as a son. The story also alternates with the back story of Adam Foole and his confederates.

The many adventures recounted over the 750 pages of this book made the time taken to read it seem very short. The research the author must have done is highly impressive as the book is incredibly atmospheric and the details of each scene are so exact that it is wonderfully evocative of the mid-nineteenth century. The description of the thick London smog is absolutely amazing. It brought back to me memories of being a very small child in such weather conditions and the difficulty of seeing beyond a few feet in front of me as I was walked along the streets by a parent and being told to keep my scarf over my mouth and nose to avoid breathing in the sooty fog. There are scenes, vividly described in the London sewers which are also very harrowing.

The book is very long but I was totally gripped as I was led by this very talented author back and forth over the history of the very richly drawn characters whether in London, Capetown or Chicago. If I had a criticism it was just that there perhaps should have been a glossary of the different characters as I found it somewhat confusing initially until I was completely immersed in the story.

This Canadian author's earlier book Into The Darkness, was short-listed for 2012 BC Fiction Prize. He lives and works at the University Of Victoria, Canada, where he teaches poetry and fiction. I look forward to reading further books from this very talented writer.

I thought this was the one of the most atmospheric historical mystery books that I have read in years and I'm sure that this will be one of my best reads of 2016. Strongly recommended.