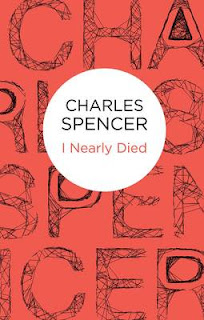 I NEARLY DIED is the first of three crime novels by the recently retired Daily Telegraph critic Charles Spencer, now brought back into print by Bello and available in ebook or hard copy.

Will Benson (who I think must be a fictional version of Spencer) has graduated from local journalism to a staff post at Theatre World. He is an ordinary sort of guy, unambitious but dissatisfied with his life, drinks too much, running to fat, an unlikely fan of the works of Noel Streatfeild.

He opens the book on an apparent drive to make enemies. Attending a terrible production of Romeo and Juliet, he pans it in a review but finishes with a final-paragraph tribute to the genuinely brilliant Juliet. His review is cut for space and leaves out the praise.
Next he interviews Joe Johnson, a thinly veiled version of a particular British nightclub comic:

Dressed in baggy khaki shorts, a scarlet Hawaiian shirt crawling with green parrots, and with a plastic policeman's helmet perched on his head […] the whole house was indeed helpless with laughter. But it was a laughter of hate and ugliness and fear.

Joe turns up to his interview steaming drunk and makes some career-ruining admissions to Will, all of which go onto tape. Joe’s agent, the tough-as-nails Harry Meadows threatens Will if his revelations get into the papers.

So when Will starts getting death threats, there is no shortage of suspects.

This is an enjoyable book, deftly satirical (‘Prejudice and schmaltz, the twin pillars of light entertainment’), unafraid to mock real-life stars (Andrew Lloyd Webber is described as having an ‘I’ve just won the prep school scripture prize’ expression). The author's familiarity with the world he is describing lends the story realism and a great sense of atmosphere. The mystery element is none too strong, but this is more than compensated for by the sense of humour, a bit of romance between Will and his colleague Kim, and a likeable narrative style. I enjoyed hanging out with Will and look forward to sharing more of his adventures.