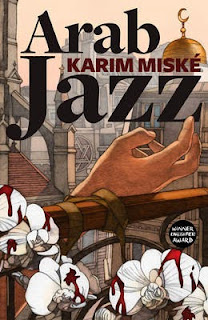 "....So, to recap: we've got three Salafists, one Hasidic Jew and a family of Jehovah's Witnesses... That is one holy hornet's nest!"

Paris, 19th Arrondissement.
Mid-afternoon.
Ahmed the Dreamer is on the balcony of his tiny apartment, watching the clouds. Dreaming. Poetry. Books. The second-hand, English-language thrillers stacked four deep around the walls of his room. Dreaming. The mountains, rocks, water and sand of his ancestors. He glides above their land, a man-vulture, suddenly plunging down towards a dark and terrible shape. His fellow vultures force him up and away. Banished. Ahmed feels the first drop of blood on his upturned face. He opens his eyes and looks upward, sees the foot of his neighbour Laura hanging from her balcony, blood gathering on the toes. Ahmed has crashed to earth.

9.15 pm. With keys to Laura's flat, for Ahmed looks after her orchids while the young air hostess is away, he goes upstairs. But her door is ajar, the window wide open. A bottle of wine on a table, two glasses and – on a white platter – an uncooked joint of pork bathed in blood and stabbed with a kitchen knife. The horror is out on the balcony. Laura, bound and gagged, T-shirt crimson, one enormous gash from the belly down. Ahmed returns to his flat, changes his stained djellaba and gets back into bed. Sleep. Dream.

3.45 am. Lieutenants Kupferstein and Hamelot, back at headquarters after having examined the murder scene, written their reports, eaten sushi and drunk beer – now sit apart, in their own worlds, distancing themselves from the savagery.

5.25 am. Ahmed gathers his blood-stained clothes and jogs along the canal for the first time in three years. In the undergrowth he burns the clothes. He feels again, he is alive. Back at his flat, carrying morning croissants and baguette, Ahmed finds two police officers. They tell him that his neighbour has been murdered. This time he allows himself to feel the shock. And invites them in. There are questions and it seems that for now detectives Kupferstein and Hamelot tacitly agree that Ahmed is not their man. Do you have a job, Monsieur Taroudant? Sick leave? For what? Depression? Before that, your job? Night-watchman. Thank you. Here are our contact details. Do not leave the arrondissement. But Ahmed never does. He closes the door behind the detectives and later, listening to the iPod that Laura gave him, loaded with her favourite music, he weeps. He will find the killer.

Meanwhile the detectives exit the lift and come face to face with the concierge. who tells them about Laura: her unrequited love for Ahmed, her three girlfriends – Bintou, Aicha and Rebecca. Rebecca is no longer in the neighbourhood but the other girls live around the corner. You can find them every evening at Onur's, the kebab place. Laura's parents? She wouldn't talk about them....

Karim Miské is a Franco-Mauritanian writer and documentary film-maker born in Abidjan but raised in France. ARAB JAZZ is his first novel, winning the 2012 French Grand Prix de Littérature Policière. Its title is a tribute to James Ellroy's WHITE JAZZ and its translator, Sam Gordon has made a vivid, natural telling in his own first novel-length translation.

Central to ARAB JAZZ is Ahmed, the son of a woman confined to a psychiatric hospital and himself a depressive undergoing psychoanalysis. (Or is he some kind of displaced shamanic dreamer?) Ahmed lives in the same arrondissement as Miské himself at the time of writing ARAB JAZZ. The 19th – a quarter made notorious by the Charlie Hebdo killings earlier this year. It is a setting used by other French writers and I think back to the books of Daniel Pennac with the 1980s-90s Belleville of his "Malaussène" series with its lively hotchpotch of immigrant cultures. But the warmth and diversity of Pennac's Belleville has taken a colder, darker turn by the time of Miské's "19th". The neighbourhood's religions still co-exist but each is moving towards born-again extremes. Miské started writing this novel around 2005 after having made a documentary about Judaism and Islam. He was aware of the growing extremism amongst some of these local communities but the Kouachi killings of January 2015 still shocked him. In a "Reader Dad" blog interview he says of his own feelings:

"I had been reading about the trial of the survivors of this [earlier] jihadi group in 2008 …. and the self-proclaimed imam of that group inspired one of the characters of the book. It was this imam who recruited one of the Kouachi brothers. When the Charlie Hebdo attack happened, I was, like everybody, horrified by the murders but also really disturbed by the way reality had re-entered my novel."

With two strong police characters, Kupferstein and Hamelot, a psychotic murderer, brutal corruption and the advent of a little blue pill that delivers a messianic high – we have a very potent brew and a plot that spans the Atlantic, Paris to New York. If you love the distinct flavour of French crime-writing and can take the misogynistic crime (and let's face it there is plenty of misogynistic crime in thrillers) this is a gripping, rich and wonderful book. With the writer's plan to develop a trilogy... start now with ARAB JAZZ.