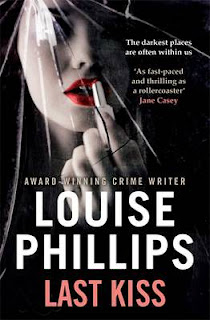 This book is superb! A chilling and original storyline about nature versus nurture, it has you hooked right from the very first page and keeps you guessing almost to the end. The way the mystery killer tells their side of the story to the reader in the first person, while the rest is told in a more usual second person, only adds to its intrigue. There are a couple of hints of possible identities for the guilty party along the way and I particularly enjoyed how, at a certain point, you are told that while you might think you have worked everything out you should rest assured that you haven’t.

Set mostly in Dublin, the book opens with a rather nasty murder. Not only is it a rather frenzied killing but the murderer has also taken time after the act to arrange the body into a copy of the Hangman image from a tarot card. There is also a smudge of lipstick on the dead body’s lips – a final trademark of the killer. Meanwhile, somewhere else in Dublin, we are introduced to Sandra; a very shy and insecure woman who is sure her handsome husband is having an affair and is having a hard time convincing her friends that she isn’t making things up. She is also convinced that she is being followed, and it looks as if our mystery killer, having found their next victim, is getting ever closer.

Criminal psychologist Dr Kate Pearson is called in to help DI O'Connor solve the case, by building a profile of the killer. She comes to the conclusion that this is the work of a savage yet meticulous serial killer who has undoubtedly killed before and is highly likely to kill again…

If you like books that are a fairly quick read and don’t mess with your head but do keep you hooked then you are really going to love LAST KISS. It has an ending that you just can't see coming, even if you do manage to work out who the killer is. LAST KISS is the third novel written by the talented Louise Phillips. She is definitely a name to look out for.