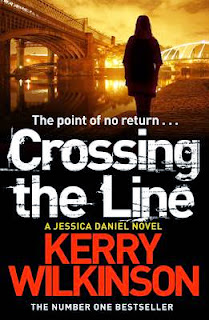 This is the eighth in the series of novels featuring Jessica Daniel (now a Detective Inspector) but is being pitched as the start of 'Season Two' as a signal that new readers can get on board comfortably without missing a lot of what is going on.

There are two main story elements here, the first starts right in the first chapter of the novel when a masked attacker begins a reign of terror by throwing acid in the face of a councillor (local politician) during a visit by the Home Secretary. This reopens a wave of media nostalgia as it is the twenty-fifth anniversary of the attacks of the Stretford Slasher - and that is the second main story theme. Running along with these is the personal situation of Jessica Daniel and her friends, especially her colleagues Izzy Diamond and, to a lesser extent, Esther Warren.

This is the first Jessica Daniel book that I have read and I was able to get up to speed with the character and her work and social situation very quickly so this is a good place to start the series. Having said that, I did enjoy it so much I bought all the earlier books in the series as e-books.

Why did I enjoy it – well Jessica Daniel is an engaging lead character and is developed by the author during the novel so you do get to know her. The supporting characters are also developed and they help to drive the plot along. The plot itself is coherent and makes sense – there are no wild leaps of logic.

My only real niggle when finishing the book, and the author does admit this in the afterword at the end, is that this novel does "feed into" the next novel, SCARRED FOR LIFE, which isn't out until next January.

CROSSING THE LINE is a good quality police procedural from an author that I will be following from now on.