Review: Buried in the Past by Bill Kitson 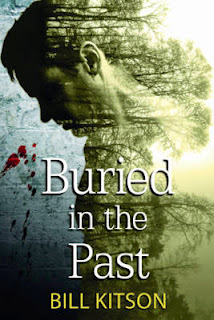 When a consignment of illicit diamonds en-route to London vanishes, together with the couriers. It isn't long before East End gangster Max Perry is found dead, having suffered some horrific torture. Accused of killing a rival, Max's nephew, Ray, is sentenced to life in prison. He is released twenty-five years later and is heading for Helmsdale when he is the victim of a terrible hit and run, but DI Mike Nash is convinced it was no accident. Following the murder of a garage mechanic, Nash discovers a link to an unidentified skeleton found years ago in the Helmsdale woodland.

How do crimes committed long ago in London connect to the current wave of violence in Helmsdale? As the body count rises, the detectives struggle to keep pace with those who would prefer the truth to remain dead and buried.

The very tight plotting of this excellent story provides the colourful conversations and banter between the various superb characters that the author peoples his books with and which make it so realistic and that one can identify with from whichever work experience one comes from. The storyline follows several different threads, which requires some concentration, but eventually they will all combine in the gripping conclusion to this fascinating book.

As in previous books of his that I have reviewed namely DEPTH OF DESPAIR (2009) and BACK-SLASH (2011) once you start a Bill Kitson book they are unbelievable difficult to put down and I had great difficulty in closing this one also, until I reached the exciting conclusion. The author has published six previous stories in the DI Mike Nash series and I understand he also writes historical fiction and lighter stories set in Greece under the pen-name 'William Gordon'. I will certainly look out for them in the future. If you want to read a book that once started you won't want to put down then buy this one. Recommended.

Labels: Bill Kitson, Buried in the Past, Reviews, Terry Halligan