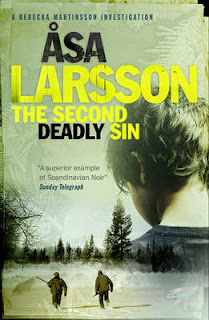 Rebecka Martinsson is once again involved in a murder investigation in this latest outing from Åsa Larsson (book five in the series). She was once a hot-shot lawyer in Stockholm, but circumstances in earlier books have brought her back to where she grew up, and she now lives in Kiruna, in the house that was once her grandmother's. She is working as the district prosecutor, and has an impeccable reputation for her preparedness and meticulous attention to detail.

As the story opens, a troublesome bear is shot dead, and is found to have a human hand in his stomach. Next, Rebecka and Eriksson, her police colleague, discover a woman, Sol-Britt, stabbed to death in her house. Outside, her grandson Marcus is found hiding outside in a children’s playhouse, and is clearly traumatised. What has he seen? What does he know? Why was Sol-Britt murdered and what is the connection to the discovery of the hand in the bear’s stomach?

Rebecka should be directing the investigation but a second district prosecutor, Carl Van Post, is nursing a grudge and manages to persuade the chief prosecutor, Björnfot, that he should take charge, leaving Rebecka to conduct her own undercover investigation while 'on holiday' (by her own choice). Police Inspector Anna-Maria Mella, a friend and a colleague, is still involved in the investigation, and keeps Rebecka informed on the quiet. It seems that the murdered woman comes from a family that has suffered a series of tragic events. For example, as well as her own murder, Sol-Britt's son had been killed in a hit and run accident some time earlier. Sadly, as a consequence, Marcus was living with his grandmother Sol-Britt because his mother then refused to look after him.

Interspersed between chapters about the current investigation, is a story set some years before, in 1914, about a school teacher who goes out to Kiruna to run a school, and ends up falling in love with a local entrepreneur. Her story is also a tragic one of unrequited love and its consequences. Gradually, the links between the current investigation and the past events reveal themselves, and Rebecka’s determination and meticulousness enable her to discover the unpleasant truth.

Åsa Larsson's books have a strong feeling of female empowerment, and not just through the strong female leads of Rebecka and Anna-Marie. This book manages to cleverly pass comment on how arrogance, pompousness and at times, weakness in a subset of men can lead to undesirable outcomes (though I should say that most men in the story are depicted in a much more favourable light!). It also shows how strong ties and co-operation between women are important in finding solutions. Rebecka's vulnerability and sense of past, combined with her strong-mindedness determination, thoughtfulness, and ever-developing character is something the reader can empathise and engage with. An interesting plot, combined with intriguing characters, means that all I want now is to read the next outing in the series! And, as always, there is a great translation from Laurie Thompson.

Sounds good to me, a fan of Asa Larsson's series.

My favorite was "Until Thy Wrath Be Past," but I'll gladly try this one.