Review: After the Exhibition by Dolores Gordon-Smith 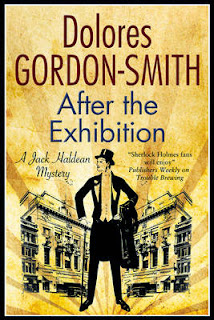 I was absolutely gripped and excited by this very well written and deftly plotted mystery set in London during the years 1924-5. The author, Dolores Gordon-Smith,has written seven other novels in this series and I was so knocked out by it I have bought the first and may buy the others as well!

Major Jack Haldean an author of crime novels and an amateur detective, with his friend Scotland Yard detective Bill Rackham attends Lythewell and Askerns’ exhibition of church art in Lyon House, London, which is expected to be a sedate affair. After all, Lythewell and Askern, Church Artists, are a respectable, old-fashioned firm, the last people to be associated with mystery, violence and sudden death. However, whilst they consider the exhibition rather boring and whilst they are waiting after the exhibition, a seller of flags for a charity appeal suddenly collapses. Later, their friend Betty Wingate, who is connected to the organisers of the exhibition is very surprised by her experience of a vanishing corpse and she tells Jack, who is also intrigued by it all; this all leads to a fascinating story which once started I just could not put down. The clues follow one another with astonishing rapidity and I found the story immensely gripping and fast moving and the pages just shot by. The story is peopled with a very interesting and rich cast of authentic, well described characters. It was very atmospheric and expertly researched giving a real glimpse of life in London and the wider country in the 1920s.

There are a few red herrings to draw the reader up the wrong road before the dramatic and very exciting conclusion is reached. I was really stumped before I reached the end of this book as to how it would end and of course I got it all wrong I'm pleased to say.

I'm very attracted to stories set during the 'Golden Age' of detective fiction and I see that this author is influenced by writers that I already admire such as Agatha Christie, Dorothy L Sayers and PG Wodehouse and having another writer of really gripping stories set during this time is excellent news. I will certainly look out for stories by this very exciting author and I'm pleased that I have already another seven to buy.