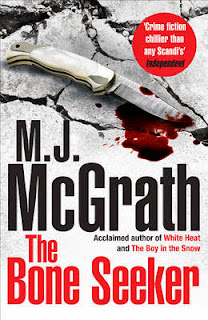 This is the third crime novel from this author, all of which have the unusual background setting of the Arctic providing a strong flavour of the local culture and how it affects people's perceptions and reactions to events. The main protagonist in these stories, including the current book, is Edie Kiglatuk, half Inuit and half qulunaat (a term for 'white person' or southerner). She is currently living in a tent in the front yard of the house of her policeman friend Derek Palliser, on Ellesmere Island, and at the start of the book, she is working as a teacher in the local school.

The story revolves around the disappearance and murder of one of her pupils, Martha Salliaq. At the very start of the book, Edie says goodbye to Martha at the end of the school week, not knowing that it would be the last time she would ever see her. Martha disappears that weekend, and then Edie, as part of the search team is one of those to find her body in Lake Turngaluk; a lake avoided by the locals, who believe it to be evil. She has suffered a horrible violent death.

With Sergeant Palliser's deputy away, Derek asks Edie to help him try to find out what happened to Martha, against the complicated backdrop of the local culture and a general lack of resources. Into the mix is the presence of the army, and a Guatemalan woman called Sonia Gutierrez, who are both involved in some kind of local clean up/decontamination at Glacier Ridge, close to where Martha's body was found. The clean up has to be delayed while the investigation starts, and the lake is drained to try to find the murder weapon.

Edie and Derek quickly trace Martha’s last footsteps, and then a neat solution to the crime apparently presents itself, but Edie is suspicious. Everything seems to be just a bit too neat, and she keeps on investigating. Equally important is Sonia’s own bit of sleuthing into the recent history of Glacier Ridge and what’s really behind the clean up, which neatly feeds into the overall story.

This was an absorbing book, with an authentic feel of life for the Inuit in the Arctic, right down to the rather unappetising descriptions of Edie’s cooking. (Some of the slightly more appetising recipes are on M J McGrath’s website). The treatment of the Inuit by the government, the installation of the army, relationships between the local people, and their general mistrust for outsiders all feed into the plot development, and there is a small closed community feel to the story. Edie is a strong, independent character, only dropping in to see her new boyfriend when she feels like it, and using all her local knowledge and resources to track down what really happened to Martha. An intriguing read then, and while I found the overall story a little predictable in places, it was made up for by the backdrop, and insight into a completely foreign culture.

Thanks for a really helpful review. Sounds intriguing and was looking for something different to read and now found it. Cheers!

This sounds right up my alley. Thanks for the great review.