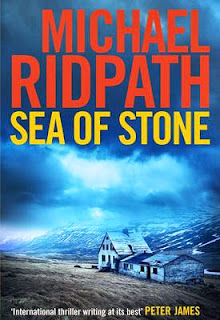 "All right. In that case, Magnus, I'm arresting you for the murder of Hallgrimur Gunnarsson. Would you like to contact a lawyer?"
Magnus seemed unsurprised at the arrest, Emil thought, as though he was expecting it...

Bjarnarhofn, Snaefells Peninsula, Iceland – 1988
Two young boys stand at a graveside as their mother's coffin is lowered into the ground. Their grandfather has warned them not to cry and after four years of his harsh raising they do as he says. A man stands on the other side of the churchyard and the boys recognise him as their father, Ragnar – come all the way from America. The older brother goes over to him but the younger stays put. There is a ferocious scene, with Grandfather shouting that Ragnar "killed" his daughter, the boys' mother. Ragnar shrugs and walks away. But next day he returns with a court order giving him custody of the boys, Ollie and Magnus. Grandfather rages. Ragnar takes his sons back to America with him.

Snaefells Peninsula – April 2010
Ollie and his new friend Johannes are waiting for Grandfather on the cliff path. Ollie is still scared of Grandfather, even though he must be in his eighties by now, but he feels safe with Johannes around, and Johannes has a tyre iron in his carrier bag.
At the family farm, Magnus finds the body of their grandfather in the tiny neighbouring church. His head is beaten and bleeding. Magnus calls in the death, waiting whilst the police team and the rest of the family arrives. Magnus's Uncle Ingvar is the first to arrive. As luck would have it, he is the local duty doctor come to certify the death. Then Uncle Kollbeinn returns, he works the farm and lives in the main house with Anita and their children. The victim's wife is missing but the family guess that she is at the church in town – she goes to church a lot these days.
It is when Inspector Emil and the forensics team arrive that doubts are raised over Magnus's role in his grandfather's death. Although a homicide detective, Magnus has been clumsy with the murder scene and his aunt spotted him earlier, in the grandparents' cottage, wiping a mug at the sink. There is a sense that Magnus knows more than he is telling and Emil has no option but to hold him on suspicion, eventually arresting him for the murder. When the shocking news reaches Reykjavik, his police colleagues are eager to help clear Magnus. But their boss says "No". He distrusts the "American" anyway. But Vigdis, another member of the team, has a couple of days leave. What's to stop her doing some investigating of her own?...

British writer Michael Ridpath's "Fire & Ice" series is set in Iceland and features Icelandic-born, Boston homicide detective Magnus Jonson. Magnus and his younger brother Ollie were brought to the US as children by their father Ragnar. Eight years later Ragnar was murdered and his unsolved killing draws Magnus to join the police. Now Magnus is back in Reykjavik, as Serious Crime advisor to Iceland’s National Police Commissioner. But Magnus is an outsider. Accepted or not by native Icelanders, he feels strong links to Iceland but, raised in America and working as a tough city cop, has experienced a very different life; the two cultures and his brutal childhood are an uneasy mix within him.

SEA OF STONE is the fourth book in the series and begins where the previous novel, MELTWATER, ends – shortly after the eruption of Eyjafjallajökull with dust clouds isolating the country and forcing the grounding of most air flights. Magnus has been drawn back into his obsession with his father's murder and its possible link to an unsolved killing in Reykjavik. When his brother Ollie arrives from America, Magnus heads out to the family farm on the Snaefells Peninsula, scene of the brothers' unhappy childhood. Death, deceit, hatred and revenge follow in short order, complete with ghostly warnings. The twisting plot travels through the mists and distorted lava fields of the past and present, gradually heating up with Ridpath's trademark race to the finish.

I relish the realism and dark nature of much Scandinavian crime fiction but I also enjoy the opportunity to mollify the psychological chill with some fiery action from Ridpath's Icelandic crime books. They hit the spot, safely straddling the worlds of "American" action crime thriller and a starkly beautiful Northern landscape drenched in history, sagas and supernatural belief. It's possible that readers new to the series might do well to read the first novel, WHERE THE SHADOWS LIE, in order to gain background on Magnus. This would be no loss – the whole series is one to recommend. But established fans can welcome SEA OF STONE which looks as though it may finally lay some of Magnus's ghosts to rest. Or will it?