Euro Crime reviewer Rich Westwood interviews the producer over at Past Offences.

Episode 1 is The Hammer of God: 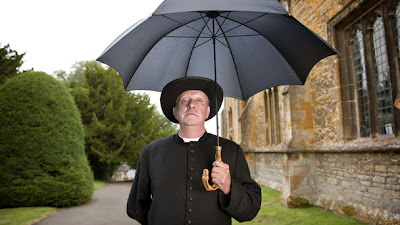 However, the serene atmosphere is shattered when his caddish brother Norman (Sam Hoare) arrives, riling most of the guests. Just after the bells sound for the first time Norman’s body is found behind the church, the back of his head hit by a hammer found lying nearby. The local blacksmith Simeon (Barry Sloane) is immediately suspected but his wife Elizabeth, (Bryony Afferson) guilty about having relations with Norman, confesses to the crime and is arrested by Inspector Valentine (Hugo Speer). Reverend Bohun implores Father Brown to find out the truth. At the police station Elizabeth confesses that she’s innocent, however until the real culprit is caught, she won’t speak up. Father Brown must find the killer before an innocent woman is sent to the gallows…
Posted by Karen (Euro Crime) at 9:00 am

Karen - Thanks for this. I really hope this series makes its way to where I live soon.