The final instalment of favourite discoveries of 2012 comes from me and is one of the books in my top 5 reads of 2012. 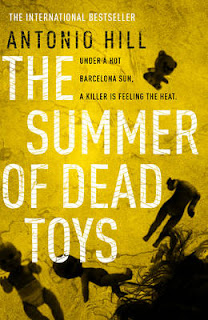 Antonio Hill's The Summer of Dead Toys, translated by Laura McGouchlin was one of my favourite reads of 2012. Set in a steamy Barcelona it introduces Argentinian police inspector Hector Sagaldo who whilst on suspension for attacking a suspect is asked, as a favour, to investigate what appears to be a routine suicide.

Of course it's anything but and Salgado finds himself uncovering secrets, mixing with the higher echelons and dealing with new colleagues.

This was one of those books I could not put down and I then foisted it on Maxine who wrote in her review that it, "is the best Spanish crime novel I've read" and concludes "I highly recommend this very assured debut novel. It ticks all the boxes for a perfect crime-fiction experience".

Meanwhile Lynn concludes her review: "I really hope that this is the start of a series that will see Salgado and his Barcelona compete with Brunetti's Venice, Montalbano's Sicily and Ikmen's Istanbul. Crime in a warm climate. Travelling can't get much more thrilling than this".

So if you haven't read it yet, there's three recommendations.

The sequel, The Good Suicides, is out in June.
Posted by Karen (Euro Crime) at 9:19 am