Today's instalment of favourite discoveries of 2012 comes from Terry Halligan. 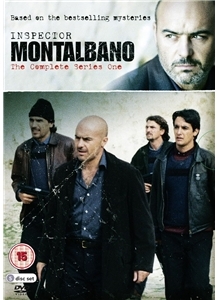 My favourite TV discovery of 2012 was Inspector Montalbano, which has been highlighted several times on this blog as being shown on BBC4. As I generally don't watch much TV apart from news bulletins, I neglected to watch it until one Saturday evening a couple of months ago when I saw it for the first time and I was totally blown away. It was brilliant, but also amusing and well plotted and it reminded me of Inspector Morse, but in Italian. It was half-way through the third series that I started watching, and after the series finished I viewed a few further programmes that were on the BBC iPlayer but then all of the remaining programmes were removed I suppose to make space for The Killing. So to get more fixes of Inspector Montalbano, before any more are shown in the future on BBC4, I've bought the box set of Series 1, which I'm currently viewing and enjoying immensely now. Hopefully, I'll be able to buy more DVDs in the January Sales.

Looking over the list of books that I've read during 2012, two American authors that I read as alternates to Euro Crime books stand out. The first is Brian Haig who is the son of Gen Alexander Haig who served as US Secretary Of State under President Ronald Reagan. Brian Haig was also in the US military and when he left he became a full time thriller writer and many of his books involve a Special Forces officer turned Army JAG lawyer Major/Lieutenant Colonel Sean Drummond. His books are very fast and fun and I see that I've read four this year starting with Private Sector (2005).

Another American author that I discovered this year is John J Nance who wrote the book Pandora's Clock (1995). Nance is an American pilot who served as an international airline pilot and knows what he is writing about when you read one of his thrillers as they always happen mainly aboard air-planes. Pandora's Clock is the first thriller by him that I read and it is about a 747 crossing the Atlantic to Europe but not being allowed to land as someone on board has a deadly virus!

For Euro Crime a favourite author that I discovered is Anne Perry who has written over 40 historical mystery books under that name and I read and I reviewed Dorchester Terrace, which is in her Inspector Pitt series. Whilst researching her books, I discovered that she was born in England but had a troubled childhood as her parents were always moving but she changed her name to the present one and after spending some time in the USA, moved to Scotland where she now lives as a very successful author. Since doing my review I have obtained her first four 'Inspector Pitt' books which start with The Cater Street Hangman. Her books are characterised by well observed period detail and very good plots. I hope to read more of them.

Karen - I couldn't agree more. I really, really like the Montalbano series. I think the characters are done well and the setting... well, what can I say? They've done a great job with this one.

I just started watching The Young Montalbano based on stories written by Andrea Camilleri, which comprise a prequel to the series we know and love.

I saw the first one, which was wonderful, shows Salvo's first case after he's moved to beautiful Vigata, Sicily.

Just for information, Anne Perry's past was a lot more troubled than her parents moving frequently. She was involved in a murder case, which is depicted in a movie.