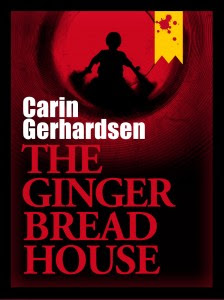 
THE GINGERBREAD HOUSE is the first in the Hammarby (Stockholm) series and features DCI Conny Sjoberg and his team.

The book opens with a scene from nearly forty years earlier involving a six-year-old boy, Thomas, being bullied terribly by his classmates. Thirty-eight years later Thomas is living a quiet and friendless life when he spots the chief culprit in the bullying, Hans, and follows him to his home and then on to a deserted house.

Sjoberg is called in when the home-owner returns from a long stay in hospital to find a dead man in her kitchen. The man is soon identified as Hans and the police investigation begins its thorough look at Hans's life. The reader knows more than Sjoberg and that this is only the first of the murders and soon more forty-four-year-olds are dying unpleasantly but their geographical distance apart means that the trend is not picked up until very near the end.

As well as the main murder enquiry, one of Sjoberg's team, Police Assistant Petra Westerman is carrying out her own investigation into a personal matter - after she wakes up in an unknown bed after a drinking session.

In addition to the two police cases, there are chapters from Thomas and from the 'Diary of a Murderer'.

THE GINGERBREAD HOUSE is an intriguing police procedural which also looks at the issue of childhood bullying and the long-lasting impact it has. The outcome to the story is somewhat unexpected and the author does well with her misdirection of the reader. Sjoberg, with his loving wife and large brood of children (including two adopted twins) reminded me somewhat of Dell Shannon's Lt. Mendoza and makes a refreshing change to the often troubled/alcoholic/divorced protagonist. I look forward to reading more about the Hammarby detectives especially as Petra's mystery looks set to continue into the next book.

The translation into American English is by Paul Norlen (who is currently translating Leif G W Persson's trilogy). I did raise my eyebrows when something cost "ten bucks" rather than ten krona however this may not be in the final version.

THE GINGERBREAD HOUSE is available in both print and electronic (Epub, Kindle* and Nook) versions and is one of several new and welcome releases from Stockholm Text.

Read another review of THE GINGERBREAD HOUSE.

*The Kindle version has (temporarily I presume?) disappeared from Amazon.co.uk but is still on Amazon.com. It is also available as an Epub from Waterstones and Nook from Barnes & Noble.
Posted by Karen (Euro Crime) at 9:00 am

The Gingerbread House is still available at Amazon. At 1.99 !!!

You couldn't post the link for me? I couldn't find it. Many thanks.

I suppose this is an American English translation? I think that's the way the books have been published anyway - they were available in the US first & presumably they've just used the same translations for the English English market. (re the "bucks") If they'd put "kroner" they'd probably used an asterisk and a translation into dollars as a footnote! (I'll never forget the Soho tranlsation of a Helene Tursten book that solemnly did this for metres, with the equivalent in feet as a footnote -- surely Amercians know what a metre is?!)

PS You are right about the UK Amazon site - you can get the book for £10.79 as a paperback http://www.amazon.co.uk/The-Gingerbread-House-Carin-Gerhardsen/dp/9187173239/ref=ntt_at_ep_dpt_1 but the kindle edition is no longer listed. Hope the publisher will rectify now you've let them know.

Oh, I'm sorry, I mixed up. The book is available for Kindle in America but not in the UK until fall...

Karen - Thank you so much for this excellent review. It does look like a good 'un. I've already succumbed :-).

Here is the US Amazon Kindle link:

If you are in the UK you can't see the US Amazon Kindle prices, though. (and vice versa)

Thanks for review, it was excellent and very informative.
thank you :)