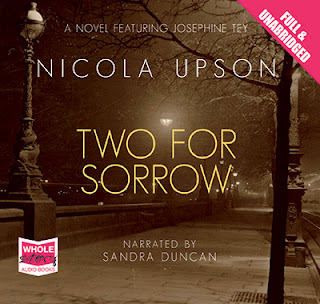 TWO FOR SORROW is the third book from Nicola Upson to feature real-life crime writer Josephine Tey. Josephine doesn't do any detecting, rather she leaves that to (the fictional) Archie Penrose from Scotland Yard.

We're back in London, after Cornwall in ANGEL WITH TWO FACES, and Josephine is staying at the women's-only Cowdray Club, run by her old teacher, Celia Bannerman. Josephine is writing a fictional account of the Sach and Walters case (two women who were hanged for “baby farming” ie baby murdering) thirty years before and Celia was one of the warders at the time and knew Amelia Sach.

There is to be a gala ball at the Club and Josephine's friends, the Motley sisters, are creating the gowns. However tragedy strikes when one of their seamstresses, a former prisoner, is sadistically murdered in the Motleys' shop and the woman's father is also found dead, just outside. Archie is called in to investigate.

As Archie digs, his investigation increasingly overlaps with the subject of Josephine's writing until he is forced to keep secrets from her for her own safety...

As well as being on the periphery of the investigation, Josephine's emotions are in turmoil with the reappearance of an old friend who wants more than perhaps Josephine is willing to give.

TWO FOR SORROW is quite long but always interesting. As well as a crime novel it's a fascinating look at the role of women in the 1930s and highlights how things were so much worse for women than men in prison. “Baby farming” is a term I'd only come across recently in a teenage fiction book (VELVET by Mary Hooper) but in this there is a lot of shocking and upsetting detail and Archie goes to some grim places in pursuit of his enquiries.

I do love the showbizzy glamour of the books set in London (see also AN EXPERT IN MURDER) with real-life actors and thinly disguised actors flitting in and out and I have one eye on Google to see who and what is real and who and what's fictional. So little is known of Tey's life that this series is like reading a biography of her, fleshing out the few known facts that there are.

Sandra Duncan gives an outstanding performance with a warm Scottish accented Josephine and clipped, attractive upper-class accent for Archie plus many more different vocalisations for the supporting cast.
Posted by Karen (Euro Crime) at 9:24 am