The next case for Inspector Montalbano (tv)

The next episode in this second run of Inspector Montalbano, at 9pm on 1 September, is Equal Time, which is not based on any of the books in Camilleri's series but may be based on a Camilleri short story. 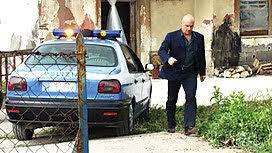 When a man is found murdered with a sawn-off shotgun, Vigata police are called upon to extinguish what appears to be the beginnings of a new Mafia war. But Montalbano has his doubts on the exact nature of this particular murder. When he is taken off the case and assigned to investigate the disappearance of a young Ukrainian woman, he gradually uncovers a series of links between the two cases.
Posted by Karen (Euro Crime) at 9:10 pm

Looking forward to this. I saw the first episode (recorded, as on too late in real time!) and enjoyed it - the characters all look older apart from Ingrid ;-). However, it seemed slightly one-dimensional compared with some of the episodes in the previous series (they dropped quite a bit of plot from the book the episode was based on, "Rounding the Mark"). Time will tell if this is a slight drop in quality from series 1 or just a one-off.