One of the dramas I mentioned in my year of translated tv shows post earlier this year was Sebastian Bergman starring Rolf Lassgard. The first of the two episodes will be on Saturday 26 May at 9pm on BBC4: 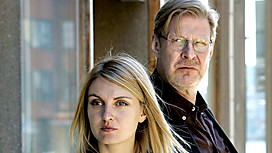 Brilliant, difficult and politically incorrect, Sebastian Bergman is one of Sweden's leading police profilers. His life and and career are on the skids when he returns to his home town, two weeks late for his mother's funeral but just in time to help the local police solve the brutal murder of a 15-year-old boy.
Titled Den Fördömde in Swedish, "Sebastian Bergman" was released in 2010.

You have been nominated for a Beautiful Blogger Award! http://adiscounttickettoeverywhere.blogspot.co.uk/2012/05/haiku-day-and-beautiful-blogger-award.html

Thanks! I'll have to try this after enjoying The Bridge (so far...still a few eps to go, behind everyone else). It is easy to guess the next step in The Bridge each time, so I hope this one is a bit more of a challenge ;-)