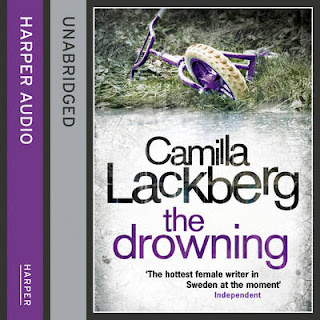 The Drowning is the sixth in the Erica Falck-Patrik Hedstrom series set in Fjallbacka and takes place a few months after the events in The Hidden Child.

Christian Thydell, one of Fjallbacka's librarians has finally had his novel The Mermaid (which he was working on in the previous book) published to great critical acclaim however all is not well with Christian as he's been receiving threatening letters which have put him in a dreadful mental state. Erica, a true-crime writer, has been mentoring Christian and when she discovers the existence of the letters steals one to show her police detective husband Patrik and inadvertently advertises their existence to the hungry press, increasing the pressure on Christian.

Meanwhile, back at the station Patrik is dealing with weekly visits by Cia Kjellner whose husband Magnus has been missing for three months. They all presume he is dead but no body has appeared.

As the story progresses it's discovered that Christian and Magnus knew each other. Is there a connection between the anonymous letters and Magnus's disappearance. And what about Magnus's two other friends from childhood, Kenneth and Erik, are they in danger too?

Alongside Patrik's official investigations and Erica's unofficial ones into Christian's background there are chapters told from the point of view of an unnamed boy who has been adopted and who tells of his terrible upbringing at the hands of a cruel mother and indifferent father.

The Drowning is not heavy on plot but there are plenty of characters to meet as well as much local intrigue. As well as the usual Falck family matters (romance, children, pregnancy, general domestic life), the listener gets to know amongst others: Sanna, Christian’s unloved wife; Lizbet, Kenneth's dying wife; Louise, Erik's cheated-on wife and Cecilia, Erik's current girlfriend. Lackberg's novels are a mix of domestic drama and detective novel and in The Drowning it sways perilously close to too much of the former at the expense of the latter. Nonetheless if you have followed the series from The Ice Princess then you will probably enjoy catching up with old friends, however if you are new to the series then this probably isn't the best place to start. The never very bright police team are stymied this time by the refusal of the three friends, Christian, Kenneth and Erik, to reveal what they know about who is behind the letters, which is rather frustrating and it takes an age for the police to do the background check on Christian.

The most interesting books, for me, have been the ones where Erica has had a personal connection: her friend in The Ice Princess and her mother in The Hidden Child.

The beautiful coastal town of Fjallbacka continues to throw up nasty people and nasty crimes which are in stark contrast to the domestic bliss (mostly) enjoyed by the two leads. The trademark cliff-hanger (two in this case) at the end of the book will have fans on the edge of their seats until The Lost Boy/The Lighthouse (title seems to vary) is published...

As usual, Eamonn Riley gives a superb interpretation and should win any audio-book sceptics over.

Read another review of The Drowning.

More reviews of Camilla Lackberg's books can be found on the Euro Crime website.
Posted by Karen (Euro Crime) at 11:42 am

May I say ditto? I was a bit harsher but that's 'cos I'm a grumpy cow but I basically agree with you.

Also agree with you about Eamonn Riley's narration and the best two books in the series.

I have this one to read (print version) so have only skimmed your review - but I know that many people feel the domesticity swamps the plot in this one. (I see from my skim you don't think the plot that great, here, either).
Ice Princess is my favourite, too, it is sharper and darker than the other books. I also liked the portrait of post-natal depression in The Stonecutter (whereas the story of the Stonecutter was naffly done) - very accurate and a topic never (?) covered in crime fic since Ruth Rendell's A Fatal Inversion about 30 (?) yrs ago to my knowledge.

I have found this series to become progressively softer and less satisfying as a crime series (unlike, eg Liza Marklund or Mari Jungstedt) but I think the author writes a good Maeve Binchy- or Joanna Trollope-style saga which passes the time pleasantly enough- for me, this is far better than plots about people toruturing children to death and sending their parents the pictures on each subsequent birthday or similar themes in modern crime fic in the UK.

Yes it is on my TBR list and I was aware already to expect a lot of melodramatic domesticity, from Bernadette's review. Reading Camilla's books is getting to be like visiting an elderly neighbour. Sweet but a little boring. Here's hoping future novels will recapture the atmosphere in Ice Princess and Stonecutter. Patrick's skills have got to improve, haven't they?