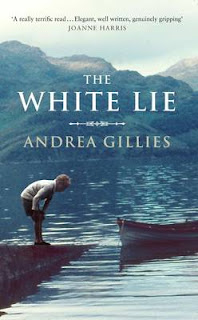 
Andrea Gillies is the author of the non-fiction book KEEPER which won the Orwell Prize 2012 and she now turns her hand to fiction with possibly award-winning results with the labyrinthine THE WHITE LIE.

“My name is Michael Salter, and I am dead; dead, that much I know for sure.”

Michael is the reader's guide and interpretor as he takes us from the present, to further in the past and even further back again. All the events occur at Peattie, an old country estate adjacent to a loch. The plot is quite simple: fourteen years previously, nineteen-year-old Michael disappears in the loch while out with a family member, supposedly drowned; no body is found so the family cover it up and say that he has gone away, left them for a new life down south. There are rumours in the village that he's committed suicide but the Salters say no more about it to anyone outside the family, and little to insiders. However the family dynamics are completely changed and the repercussions extend further and further as the family expands. Finally a birthday party brings things to a head, everyone's talking about Michael, and eventually the truth is revealed to the reader.

Put quite so baldy it seems unlikely to be a gripping read and yet THE WHITE LIE is fascinating and puzzling and even when you think you know what happened at the loch somebody else says they were lying and you're no further forward. Indeed as Hugh Laurie's Dr House says “Everybody lies” - though to be fair they may not know that they are lying.

Beautifully written and replete with mysteries and family secrets I thoroughly enjoyed this book. It's one that requires concentration, as at first I did have to keep referring to the family tree at the front to keep the large cast straight. The setting is convincingly brought to life and you really feel present in that house and at the family meetings and when you do get to the resolution you'll want to go back to the beginning and reread to see if you can pick up more clues second time around.

This may only be a crime novel in the tangential way that Catherine O'Flynn's WHAT WAS LOST is but I'd recommend it to both genre and non-genre fans alike.
Posted by Karen (Euro Crime) at 1:42 pm

I had heard good things about this book - it sounds really great from your review. Definitely on my list, now. Your comment about the family tree reminds me of the complicated Vanger family tree in The Girl With The Dragon Tattoo - quite complicated even though crucial elements were missed out! But even so, useful, to remember which Vanger was which.