Review: The Capture of Cerberus & The Incident of the Dog's Ball by Agatha Christie read by David Suchet 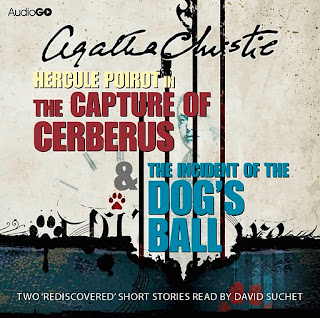 Some background information taken from the back cover:
In 2004, a remarkable archive was unearthed at Agatha Christie’s family home, Greenway – 73 of her private notebooks, filled with pencilled jottings and ideas. Hidden within this literary treasure trove were two rare, never-before-published short stories, discovered by archivist John Curran and published in his book ‘Agatha Christie’s Secret Notebooks: Fifty Years of Mysteries in the Making’.

‘The Capture of Cerberus’ was intended to be the twelfth in her collection of Poirot stories, ‘The Labours of Hercules’, but she eventually rewrote it, keeping only the title.

‘The Incident of the Dog’s Ball’, probably written in 1933, was reworked as the novel ‘Dumb Witness’ (1937) with a different murderer and motive.

Review: In The Capture of Cerberus, Hercule Poirot is in Geneva. The Second World War is looming and he wishes that people would be passionate about peace rather than fighting. A meeting with the fascinating Countess Vera Rossakoff leads him to investigate a case for a German man who cannot believe that his son assassinated an important leader. Poirot must find the truth for him.

In The Incident of the Dog's Ball Poirot appears in a more typical investigation, when he receives a very delayed letter in the post from an elderly lady who is troubled. When Poirot and Captain Hastings go to visit her, they are too late - she has died. The companion inherits, cutting out the two heirs. Was the death natural causes, or murder?

A fabulous coup for AudioGO, getting the actor who is Poirot to narrate these two rediscovered stories. David Suchet has a compelling natural voice and of course can perform the necessary accents and voices well (with the exception of the oddly Welsh sounding Russian one given to Vera Rossakoff). In The Capture of Cerberus gives a glimpse into life as tension grew in Europe and is a rather different tale than you might expect from the author associated with vicarages and stately homes. In this one Poirot plays more of a central control figure, getting others to do the leg-work, rather than getting out himself. The Incident of the Dog's Ball, which is a few minutes longer than the other story, is a cut down version of a typical Poirot investigation - you may be able to solve the case before Poirot, just.

With the number of new Suchet/Poirot/Christie episodes on the tv running low, as most have been filmed now, I'm very grateful for these additional two stories which I enjoyed listening to.
Posted by Karen (Euro Crime) at 11:19 am

Lovely reviews, Karen! I'm so glad you enjoyed those stories and of course, with Suchet doing the narration, what's not to like? I agree, Suchet is Poirot.

Great review! I`m reading this for sure!