The Girl With The Dragon Tattoo & Empire & Clothing

I've very recently read Mark Kermode's The Good, the Bad and the Multiplex in which he devotes a whole chapter (and there're only 6 so it's a good portion of the book) to the plight of films not in the English language and those usually dreadful, misguided English-language remakes. He also asks, when was the last time you saw a "foreign language" film gracing the front cover of a film magazine like Empire. In the book he can't think of an example however he may have discovered once since, I don't know. He also complained how his announcing the BAFTA (for Film Not In The English Language) for The Girl With The Dragon Tattoo was cut from the BBC's programme as though it was of little interest.

Compare these points with the current cover of Empire and its coverage of "the film event of the year". 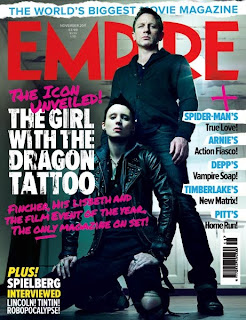 Plus I don't know what Dr K will think of Julian Sands' involvement.

Thanks to Petrona for the Empire cover suggestion.

And...just in from the Guardian... H&M have a new clothing range inspired by Lisbeth Salander: 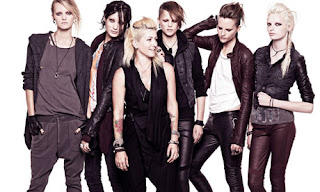 Labels: Films, Millenium film, The Girl with the Dragon Tattoo

I have to say I think Daniel C has looked a bit handsomer in other roles! ;-) I hope that my teenage daughter does not spot that Lisbeth clothing range - some hopes as H&M is one of the (very few) shops she likes.

This is very interesting because after I read The Girl with the Dragon Tattoo I watched the film version. Now I was prepared to sit and read subtitles and was amazed that the thing was dubbed!! jeez louise!

Oh well, those who find it difficult to read will be able to enjoy the new version without even realising that this is a remake of a recently released film.
sigh.