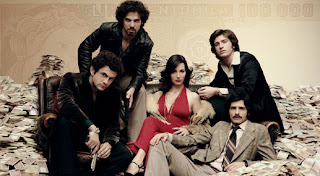 I didn't realise my Sky package included Sky Arts until a few days ago and annoyingly just missed the opportunity to record the original Insomnia but I am in time to set my Sky+ for the series of Romanzo Criminale which starts tomorrow night at 9pm on Sky Arts:

Set in Rome during the 1970s, Romanzo Criminale (Crime Novel) is based on the award-winning film of the same name which tells the true story of the Banda della Magia, the prolific and bloodthirsty crime family in Italy who were responsible for some of the most violent crimes the country had ever seen.

Romanzo Criminale first burst into the world as a gut-wrenching crime novel by Roman judge, novelist and scriptwriter Giancarlo De Cataldo. After becoming a cult novel in Italy, it was turned into a hit feature film which was the recipient of countless awards including an Italian Golden Globe. The series was also a huge success in Italy, with critics praising it as “The only Italian series of which we can be proud,” while leading newspaper La Stampa called it “the best television series ever produced in Italy.”

Political murders, spectacular bombing and high-profile kidnappings, the story is set in the violent underworld of Rome, a patchwork of petty gangs and small-time crooks where one young man, known only as The Lebanese, dreams of rising to the top of the pack. As he proves himself through a series of brutal crimes, he makes valuable connections among corrupt cops and politicians, and in the Secret Service, which seeks to enlist the gang to destabilize the government and provoke a right-wing coup.

Pitted against the world of women, drugs, gambling and clubs of The Lebanese and his cohorts is the young idealistic police inspector Nicola Scialoja. Seemingly the one man not in the pay or pocket of the Mafia or the corrupt State, Scialoja is determined to bring the ferocious gang to justice, whatever the cost to himself or to the rules of the law.

Is this a remake of the movie based on De Cataldo's book?

It appears to be: "based on the award-winning film of the same name" you'd think they'd look at the book rather than the film?

quite simply the finest thing i have ever seen on tv. from start to finish i was totally hooked cannot fault it one bit every character was amazing. would really like to find out who the characters were based on.

This is based on the book not the movie. That's why they did a series, because they had to follow the book, therefore longer.

@John rooker: "would really like to find out who the characters were based on"


I could copy you some links but they are in italian.