I received a press release today from Transworld about a new Jack Reacher book from Lee Child (in addition to the upcoming The Affair) which will be digital only: 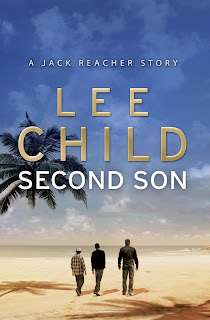 Second Son by Lee Child will be published as an exclusive, specially priced eBook globally on 15th August 2011. It will also be released as an audio digital download. This is the first time Transworld has published a major author in digital exclusive format.

Lee Child takes his millions of readers back in time, to a family living on a military base in the Pacific, and to its youngest son – a quiet, brilliant, and already heroic thirteen year old named Jack Reacher.

It's been reported on The Bookseller that there are no plans to release it as a print book.

The press release also states that "Paramount has confirmed that One Shot will be filmed with Tom Cruise in the starring role as Jack Reacher".
Posted by Karen (Euro Crime) at 8:03 pm

Americans and perhaps the rest of the world too are yearning for a compelling heroic figure. A man who beyond size is of great strength of character, has huge personal integrity and is mightily self dependent. No gadgets or inessential accouterments for Reacher. The world wide appreciation for this protagonist is genuine.
The man who seems right for the role is Ray Stevenson.

As a massive Lee Child fan (pretty much my fav. author) it hurts me that they have picked a well known short actor to play him.

However I am willing to be proved wrong and it is possible it could turn out to be very well cast, we will have to wait and see I guess....

I am lucky too as a Reacher fan, although I am retired in Thailand I am able to read all Jack Reacher books as used so not expensive, there is a marvellous used book store near where I live called Canterbury Tales Cafe & Bookshop, Pattaya where I while away the hours with an espresso and a good lee Child Book amongst others.