An Interview with Leigh Russell

Euro Crime, in the shape of reviewer Amanda Gillies has recently interviewed author Leigh Russell about her books and her route to getting published.

Amanda has already reviewed Leigh's first book, Cut Short which is the beginning of the DI Geraldine Steel series. The second book, Road Closed which has just been released, will be reviewed shortly.

ROAD CLOSED, the second novel about DI Geraldine Steel, has just been published by No Exit Press. Euro Crime caught up with its author, Leigh Russell, and asked her a few questions….

Can you remember what first got you writing?

I was walking through my local park one rainy day. As I approached a tangled copse of trees and shrubs by a bend in the path, a man came round the bed walking towards me. I don’t know where the idea came from but I wondered what I would do if I walked on and saw a body in the bushes… and I’d seen this man, I could identify him… I walked on, and there was no body in the bushes, but when I reached home I started writing the story. Who was the girl in the bushes? Had anyone noticed when she didn’t come home? Perhaps she had a boyfriend who used to knock her about. Would the police suspect him? Then there was the killer’s story… Finally I had to bring in the police… Within six weeks I’d written 85,000 words spinning out of that one random thought.

So, was it a hard slog to find a publisher for CUT SHORT or was the whole process easier than you thought?

Having completed my manuscript I thought I might as well have a go, so I found three publishers who specialise in crime fiction and sent them what I’d written. I didn’t expect to hear from any of them but two weeks later I had a phone call from my publishers and a couple of months later they signed me up for three books.

ROAD CLOSED, your second book, is just out. Has the build-up been as exciting as it was with CUT SHORT or are getting used to it all now?

ROAD CLOSED was printed ahead of schedule as WH Smith’s Travel want to promote it in June. A month ahead of its official publication date it is already selling on amazon, with only 5 copies left in stock and more on the way. I didn’t expect to feel so excited about my second book – but I am! What with writing my third book, DEAD END, and promoting my first, CUT SHORT, I’ve had no time to stress about how ROAD CLOSED will be received, but it seems to be selling well.

Are you pleased with the way in which CUT SHORT has sold?

I’ve been completely bowled over by the success of my first book, which has been reprinted three times in its first year.

What’s it been like, doing numerous book signings and keeping the momentum going? Where on earth have you found time to carry on with your writing?

I enjoy getting out and about meeting readers, whether or not they decide to buy my book, and people in general have been very friendly and generous. Time is my main problem as I still work full-time. Fortunately I write very fast…

Can you give away any secrets about ROAD CLOSED to your Euro Crime fans? You know, just to keep us going …

Geraldine is in for a surprise in ROAD CLOSED, and the killer’s identity isn’t apparent from the start as it was in CUT SHORT. I’m not going to tell you any more – but I hope you’ll read the book and find out!

What kind of books do you like to read yourself and which author do you admire the most?

One of the sad aspects of my life right now is that since I started writing, I have very little time to read. I do enjoy crime fiction, especially psychological thrillers, but my tastes are fairly eclectic. My favourite authors include F Scott Fitzgerald, Edith Wharton, Dickens, Ian McEwan, Kazuo Ishiguro, and in my own genre Simon Beckett, PD James, Ruth Rendell, Frances Fyfield and, of course, Jeffery Deaver who took the time to email me to let me know he’d read CUT SHORT and “loved it!”

So, what next, for you as well as Geraldine?

I am finishing the first draft of DEAD END, and my publisher has already put in an offer for a fourth book in the series, so it looks as though Geraldine Steel is going to be around for a while. As for me, I’ll continue writing, giving talks at literary festivals, colleges and libraries, giving interviews on BBC Radio and online, trotting round the country signing in bookshops…

Finally, do you have any tips for those of us that think we have a novel in us somewhere?

It is very exciting to be a published author, but for me the main buzz is the writing, so my advice is to enjoy writing for its own sake. If you find a publisher, that is a bonus.

Thank you very much for interviewing me here, with such searching questions. I am grateful to you for writing such a glowing review of CUT SHORT; I really hope you enjoy ROAD CLOSED just as much.

Thanks for taking the time to chat with us, Leigh.
We are really looking forward to reviewing ROAD CLOSED and wish you all the best with it. 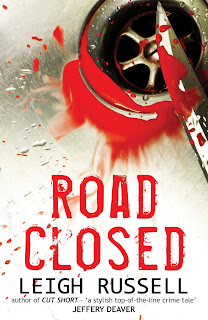 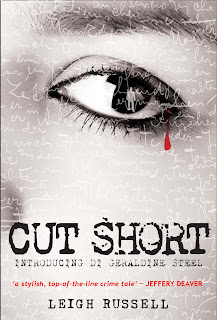 You can read more about Leigh and her books at her website.
Posted by Karen (Euro Crime) at 2:56 pm