Review: A Long Way Down by Ken McCoy 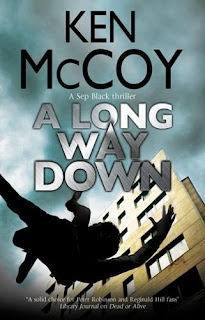 Leeds, West Yorkshire, March 2014. Charlie Santiago, a successful businessman, plunges to his death from his high, office window. There has been signs of a struggle but the police investigating can find nothing, so the case is consigned to the Cold Case Unit.

The following March, journalist James Boswell is meeting a woman in a run-down hotel. Besides the woman there is a man who surprises James and kills him. His widow, angry that the police investigation suggests he was murdered by a prostitute, contacts Detective Inspector Septimus Black having been advised by Sep's girlfriend Winnie O'Toole that he is the best man to approach.

Sep is working for the Cold Case Unit and persuades his boss Detective Superintendent Jane Hawkins that he should investigate. Sep finds that Boswell was investigating Charlie Santiago's death. Sep visits the hotel where Boswell was murdered and interviews the receptionist, but then she too is murdered. Then there are several attempts on Sep's life, the last one nearly killing him and leaving him in a wheelchair. He believes that the attacks have been carried out on the orders of Carl Redman who was an associate of Santiago.

Sep and Winnie plan to disappear out of harm's way. Sep's colleague DS Fiona Burnside is a great help, but Sep is aware his old enemy DCI Robin Wood is up to something. Can Sep keep safe? Can he find out who killed Santiago and Boswell? Will he ever marry Winnie?

This is the second book in this series. The author also has four books in the Sam Carew series. I've read several and you can always rely on plenty of action and an enjoyable read. Recommended.