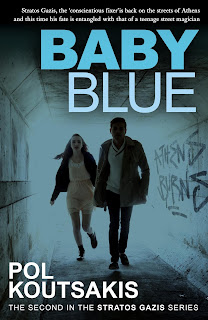 We always let down those we love most. And we always take the gamble that they’ll understand.

A spring night in Athens:
When a friend rings Stratos Gazis asking for his help, Stratos is surprised. After all it’s Stratos who usually calls him, not the other way round. Stratos immediately sets out into the Athenian traffic despite longing to see his current and childhood love Maria as they had arranged. At six foot three and 220 pounds Gazis draws attention and as he dislikes drawing anyone’s attention his route is carefully planned. Stratos is a “caretaker”; he takes care of people with a gun. But he doesn’t think of himself as a hit man. He does his research and if he considers the target doesn’t deserve to die then he won’t take the job. That’s his deal. He’s the best and he can afford rules.

Angelino is the old friend from the streets, an information dealer, who has asked for Stratos’ help and tonight Stratos finds himself a world away from the decrepit square Angelino used to live on with his ancient dog Hector. Stratos is buzzed into a graffiti-less neoclassical building past security guards and into a spacious sitting room filled with twenty guests at least. Angelino is hosting an investors evening. All of the guests are entranced by a young girl performing incredible feats of conjuring and magic. This is Emma; prodigiously talented, beautiful – and blind. Emma is the investment in question. To be precise, her bid to take part in the Magic Olympics. Winner takes Vegas and New York. And it is also Emma who is asking for help. She tells Stratos that when she was little she was rescued from an orphanage by a journalist. He brought her up and she regarded him as her father. They ended up living on the streets after he left his job. Three years ago he was murdered – tortured and shot. It was Emma who found his body. Now she wants Stratos to find her father’s murderer. She wants revenge.

It’s after midnight when Stratos hurries back to Maria. He spots a familiar car parked on his street. It belongs to another old friend, his closest, Kostas Dragas known as Drag, a famous homicide cop with the Athens police. Not the usual companion for a “caretaker” but again … it goes back to tough childhoods. Drag wants to discuss his latest case with Stratos: a series of killings. All of the victims had been spotlighted by a local TV station; named, shamed and identified as paedophiles. All were tortured and shot in the same distinctive manner and it looks professional. Drag agrees that it’s not Stratos. Still, he wants his view on the killings. In return Drag requests the coroner’s report on Emma’s father. But when the report comes back Stratos is struck by its details. The body of Emma’s so-called father bore all the same hallmarks as those of the dead paedophiles...

Pol Koutsakis is a Greek writer and playwrite and BABY BLUE is his second crime novel narrated by the character Stratos Gazis. (The first is ATHENIAN BLUES.) In this story Stratos takes on a convoluted, action-filled hunt for both the killer of Emma’s protector and the Avenger, a serial killer of paedophiles. He also juggles with his feelings for Maria; his knowledge of the danger that his chosen role brings her. The novel slices through modern day Athens from bottom to top; from the decay and corruption of modern Athenian poverty to the luxury and power of those who still “have”. According to writer Pol Koutsakis this is what fuelled him to create the ambiguous character of Stratos, a hard-bitten hero who straddles a grey area of morality. I do wonder if ambiguity of character is allowed to stretch to the women in Stratos’ world; they do seem to be either saints or sinners in his eyes. But I'm being rather tough. This is the world of Noir films that Stratos loves and frequently quotes. And in his noir world Stratos is much more Robert Mitchum than Bogart; tall, strong, menacing, he is effective, he does the job. I just miss a touch of Chandler wit to soften the bullet, if you pardon my phrase.