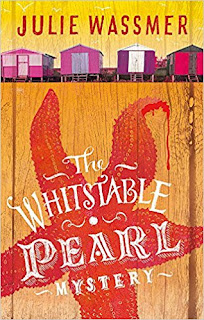 As might be expected from the title, this book is set in the seaside town of Whitstable, famous for its oysters, and for the rather strange constructions just visible out at sea, called the Maunsell Forts. These were built during the Second World War, and used to provide anti-aircraft fire. The heroine of the novel is Pearl Nolan. She runs a popular seafood restaurant in Whitstable, 'The Whitstable Pearl', with her somewhat eccentric mother, Dolly, but she would rather be a detective. Still only thirty-nine-years-old, she has a grown-up son Charlie at university a short distance away, and is now trying to start up her own private detective agency.

The book revolves around Pearl’s first proper case. A Mr Stroud contacts her and asks her to track down a local oyster fisherman called Vinnie Rowe. Stroud apparently lent Vinnie some money to help him lay down some new oyster beds, and is now looking for a return on his investment. But Vinnie is nowhere to be found. Pearl agrees to help, and in this case it should be easy, as Vinnie is an old friend. When he doesn't respond to her call either, she decides to go out and see if he is on his boat ‘The Native’ which she can see out at sea. And that’s when she finds his dead body, tied to the anchor rope in the water.

The police start to investigate, and it is DCI Mike McGuire from Canterbury who is in charge. Recently transferred from London, for his own personal and rather tragic reasons, he is starting to regret it. But the murder sparks his interest, as does Pearl herself. And then, when Mr Stroud also goes missing and is then found dead - once again, Pearl finds the body - Pearl finds herself in the middle of a mystery. One she is keen to solve herself.

THE WHISTABLE PEARL is a strange mixture of a book, which almost seems to be a murder mystery set in the middle of a tourist brochure for Whitstable. Alongside Pearl, her family and DCI McGuire’s search for the murderer, lie abundant descriptions of Whitstable, the people and the culture, with a bit of oyster politics thrown in for good measure. Pearl is a thwarted police detective and keen to help McGuire help solve his case, with her helpful local knowledge and personal connection an asset. And McGuire develops into an inevitable love interest. Having had a glorious holiday in Seasalter myself, and enjoyed the Whitstable oysters, I appreciated the setting. Pearl is a likeable if somewhat clichéd character, and the story is well paced, with some twists and turns along the way. I suppose I would have liked a bit less of the tourist brochure though, and a bit more character development. At one point Pearl tells McGuire ‘Clues to a crime are like ingredients for a meal, don’t you think? Put them together in the right way, and the result can be very satisfying’. An apt comment! I wouldn’t give this book a Michelin star, but it was a satisfying outing.

Very many thanks for reviewing my book, Michelle. The new (5th) book in the series is out on 7th June from Little Brown and the books have now been optioned for TV by Buccaneer, the company that makes Marcella, with Anna Friel. More info and location photos can be found on my website on this link: www.juliewassmer.com. I do hope you can review the new book.