Review: The House of Four by Barbara Nadel 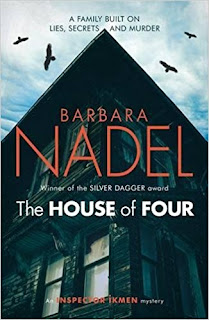 There is an old crumbling house that the locals know as the Devil’s House, believed by most to have been long abandoned. However it was occupied by 3 brothers and their sister – all in their 90s – and all apparently stabbed through the heart on the same day.

Inspector Ikmen slowly unravels the history of the house and the sad history of the four old people who only communicated with each other by letters which show their hatred of each other. Ikmen comes to believe that their murder can only be solved by uncovering the events of years before.

At the same time someone is killing people at random in the City and Inspector Mehmet Suleyman is charged with identifying and stopping the killer. The cases move slowly together but is it the same killer?

This is the latest of the series featuring Inspector Cetin Ikmen. Set in Istanbul, a secular city but with a rising number of citizens who would like to see the return of a more conservative Muslim society.

For me the history of Istanbul and its people is an important and interesting part of this series. The complexity of that history and how that still influences life today make these a fascinating read.