Review: I Am Missing by Tim Weaver 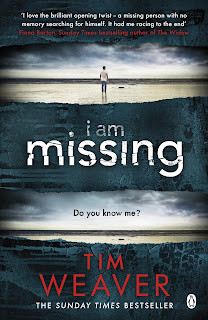 Richard Kite is someone who has no memory of who he is or where he came from. He was found besides a lifeboat station on the Hampshire coast. His name has been made up for him. He asks private investigator David Raker to try and find out who he is. He seems to have a west country accent but is not recognised locally.

Richard sees psychologist Naomi Russum based in London. Raker visits Russom's clinic but finds her evasive. He gains access to her office illegally and finds photographs that she uses in her sessions with Richard, they include two photographs of a mysterious woman. Raker follows Russum to a school – The Red Tree City of London school.

Raker finds a mutilated woman's body on a disused railway site and connects this to the school, and particularly to a teacher – Jacob Howson. He meets the school's head Roland Dell and meets the sinister security chief Alexander Marek. Can Raker find out who Richard is and why he has lost his memory?

There are three parts to the book. The main part is with Raker's investigation. The second part is a diary written by a young girl Penny Beck. She appears to live on an island in the south Atlantic, very similar in climate to the Falklands. She lives with her mother and stepfather and step sister Beth. There is an area on the island fenced off called the Brink and all islanders are warned to keep away. The third part is a travel book around Britain's shores.

I have read a couple of the author's David Raker series and enjoyed his compelling storytelling. This book is equally rewarding. I didn't find the storyline around the Brink very plausible, however this is a minor criticism. Recommended as a good read.