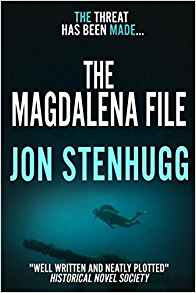 Sara Markham, 36-year-old Homicide Investigator at Sweden’s National Bureau of Investigation is called to a crime scene: a body of a tortured man was found in his own home on Sela Island. He seemed to have been electrocuted and then shot twice closely in the chest. Initial investigation showed that the victim was Leo Hoffberg, outspoken and rebellious MP who had recently quit Parliament, interested in environmental matters, former member of the Defence Department Committee. Just before his death he had seemingly delivered a letter to the Prime Minister, threatening to expose secrets and to destroy the entire city of Stockholm.

His shocked and grieving wife Kristina couldn’t fathom any reason for the murder, though she pointed at Magdalena, a cleaner from Poland, and decided to check through all her husband's possessions. Documents come to light showing that Hoffberg might have bought a manual for a Shkval, a nuclear Russian torpedo.

But as Sara begins to work on the case, she gets contradictory messages from her superiors. She’s also required to look for Martin Spimler, whose boat was found drifting empty in the waters opposite Stockholm’s City Hall. The missing man, a retired Navy diver was interested in a ‘fish project’ and travelled to Estonia some time ago with Hoffberg.

At the back of her mind is the tragedy of MS Sally, brought to her attention at the victim’s home. The sinking of MS Sally in September 1994, off the coast of Sweden and close to Estonia, had put the entire nation into a state of mourning. The wreckage of the ship has never been discovered, but several theories float around, implying that the dangerous weapon, the infamous Shkval, was being smuggled to Stockholm.

The quote at the beginning of the book is indeed very apt: "Three may keep a secret, if two of them are dead". The author cleverly moves between different points of views, to muddy the waters, not just for the readers for also for the main players. Hard-working Sara is kept in the dark; her boss Sven Peterson wants quick results yet seems to withhold certain information; Chief Inspector Lars Ekman, head of the Counter Terrorism seems to be pulling all the strings, and then a legendary retired US Army CID Lieutenant John Hurtree is brought to Europe as a ‘tourist’ and the only person who might have seen the elusive Schneller, an ex-Stasi secret agent. Sara tries to balance the conflicting demands and her own equilibrium while convinced that a certain Kim Lemko, somehow connected to the murdered man, and a technological company in Tallinn, is behind the murder, and also a link to the dangerous torpedo hidden underwater.

Jon Stenhugg is a pen name of a Swedish author born in California, USA. A graduate of Education, Psychology and Statistics from Stockholm University his career involved teaching and IT. THE MAGDALENA FILE follows his debut novel THE SECOND CHILD, and again demonstrates his fascination with European history. The fast-moving tight plot offers plenty of surprises, and an occasional cynical sense of humour which lightens the mood of an otherwise very serious thriller and shady politics, with the caricature-like Swedish Prime Minister and a sleazy Deputy Minister of Foreign Affairs at the centre of the current investigation. Relationships between central characters keep changing as quickly as the priorities which move from the local searches to the wider international arena. The dark past is never far behind and its enigmas can have devastating consequences, as shown by the background stories of Kim Lemko and the mysterious Magdalena.

THE MAGDALENA FILE is a good solid read.