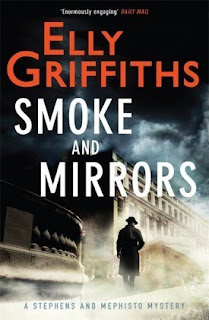 This is the second book from Elly Griffiths that is set in Brighton, post-Second World War, featuring detective Edgar Stephens. There is a new person on the CID team, a woman called Sergeant Emma Holmes, the subject of a lot of teasing, although Edgar takes a good professional attitude, and knows not to ask Emma to ‘put the kettle on’. The case facing the team at the start is the disappearance of two children; Mark, aged twelve and Anne, aged thirteen. They had been out playing after school, but had failed to come home when it became dark. And then, the children are found dead a few days later, discovered by a dog walker, with a trail of sweets leading to the bodies.

Edgar’s old friend Max Mephisto is also in town, playing in the pantomime 'Aladdin' as Abanazar, the Demon King, a job forced on him due to lack of work. Magicians are losing out to comedians such as Tommy Cooper, and the new development of television.

It turns out that Annie was a budding playwright, and had not only been writing plays, but had organised the other local children into an acting troupe, so that they could perform the plays in the garage of ‘uncle’ Brian. The garage itself had been set out as a mini theatre with red curtains above a small stage at one end. Brian is sure that the children hadn’t just run away, as they’d been looking forward to going to see 'Aladdin' the following week. But even more strangely, Annie’s latest play had been entitled ‘the Stolen Children’. Is there a connection? Or can the children’s death be somehow related to another similar children’s play ‘Hansel and Gretel’ or ‘Babes in the Wood’?

The usual slow but careful investigation follows, with Edgar and Emma both following up on different possible leads, to try to find out why the children went missing and who took them. Is there a link to the theatre and even to the theatrical production that Mephisto is starring in? The introduction of Emma onto the investigating team is a nice touch, and Edgar seems to have an incredibly modern attitude to women, choosing to use her skills and intelligence, rather than giving her more menial tasks to do. A gentle, entertaining story, that makes good use of the backdrops of Brighton and the theatre.