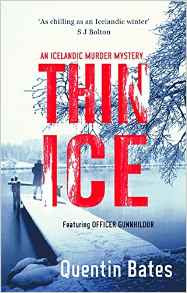 I’d like the Icelandic cop Gunnhildur Gísladóttir, known as Gunna, to be my friend: no-nonsense, tired, logical, grumpy and loving, with sense of humour and boundless capacity to understand; a big country girl who still appears to be finding her feet in the capital. Well, maybe not a girl anymore… All these qualities get mixed up constantly to show a very real portrait of a woman who has to deal with criminals, the system and her own family. And in THIN ICE she is having quite a hard time as her own painful past catches up with her while she investigates the disappearance of two women into the thin crisp November air, and a strange arsonist attack in Reykjavík in which a petty crook dies. Gunna’s methodological, pragmatic methods, with support from faithful colleagues Eiríkur and Helgi, bring answers to the apparently unrelated riddles, and though the story is not Gunna-driven, her presence is felt everywhere.

So… Two minor baddies get into trouble, even if practical and reasonable Magni happens to be the accidental criminal: after losing his job on a trawler he agrees to assist Össur, an ambitious but stressed out crime kingpin in robbing a leading drug dealer called Alli the Cornershop. Magni acts as a ‘heavy’, muscles to Össur’s brain. They leave the scene with more than a quarter of a million euros. Yet the ‘escape to the sun’ plan goes wrong. They hijack a car with two women: mother Erna and daughter Tinna Lind and flee Reykjavik to the middle of nowhere where they have no choice but to break into a small hotel closed for the winter. Soon enough a new relationship comes to life within the group. While terrified high-maintenance townie Erna is in a state of shock, and Össur, gun glued to his side, swings between fury and anger in his cloud of stolen dope and rubbish television shows; Tinna Lind, hippy and carefree, finds the captivity very exciting. She develops a crush on Magni and so a new type of Stockholm syndrome case is born: one where the hostage tries to take initiative because Plan B fails to materialise, and her ‘hero’ takes care of getting supplies and petrol, cooking stews, and diplomatically smooths over aggressive Össur’s outbursts. Tensions rise... The four fugitives from law and crime underworld realise that being snowed in will not protect them from the police and Alli’s revenge and more powerful friends. Because detective Gunna will eventually find their scent.

Reading Quentin Bates’ books feels like being immersed in a good friendly chat: words easily flowing, plot developing in a relaxed manner, and suddenly bang! There’s another dose of cruel violence and though sort of anticipated it comes as a shock after you’ve became lulled into a sense of weird false security, magnified by the picturesque Icelandic landscape, promising peace and quiet. These contradictions make THIN ICE another gem from the master of the engaging and suspenseful crime story, who creates convincing characters and effortlessly portrays a country that he knows so intimately.