Good news! Simon Brett's Charles Paris returns, after more than 15 years away, in his eighteenth adventure, the aptly named, A Decent Interval. It will be out in March in the UK and July in the US, from Severn House.

I used to love these so I'm really pleased to see a new title. 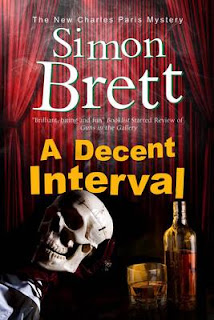 By popular demand: a welcome return for Simon Brett's actor detective Charles Paris, last seen in 1997's Dead Room Farce. After a long period of 'resting', life is looking up for Charles Paris, who has been cast as the Ghost of Hamlet's Father and First Gravedigger in a new production of Hamlet. But rehearsals are fraught. Ophelia is played by Katrina Selsey, who won the role through a television talent show. Hamlet himself is also played by a reality TV contestant, Jared Root - and the two young stars have rather different views of celebrity and the theatre than the more experienced members of the cast. But when the company reach the first staging post of their tour, the Grand Theatre Marlborough, matters get more serious, with one member of the company seriously injured in what appears to be an accident, and another dead. Once again, Charles Paris is forced to don the mantle of amateur detective to get to the bottom of the mystery.
Posted by Karen (Euro Crime) at 12:26 pm

Karen - Thanks for passing this along. It really is good news!