Review: The Sound of One Hand Killing by Teresa Solana 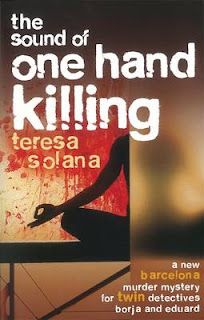 THE SOUND OF ONE HAND KILLING, the sequel to A SHORTCUT TO PARADISE, sees the return of Barcelona-based non-identical twins, Borja and Eduard who scrape by, by running an unlicensed PI firm. Their secretary is a whiff of perfume and they have fake doors in their office.

The credit crunch is hitting them hard and Eduard's wife's self-help business is struggling. Borja finds an illegal way of getting some extra funds by acting as a courier for what's probably stolen goods. Fortunately a more ethical way of earning money comes when author Teresa Solana hires the twins to do some research into "alternative" treatments.

The duo check into a weekend of treatments at 'Zen Moments' but they're soon involved in a murder which takes place in a closed community situation. In addition Borja's activities are catching up with him in the shape of some thugs, plus there's the matter of the dead body in the apartment above their office.

All three strands tangle together to make for an enjoyable, light-hearted read in which homeopathy gets a skewering along the way. The boys do do some detecting, mostly at the unexpected request of the police, all against the backdrop of Barcelona.

THE SOUND OF ONE HAND KILLING deliberately leaves some loose ends to be followed up in another book and I look forward to it.
Posted by Karen (Euro Crime) at 9:00 am

Labels: Reviews, Teresa Solana, The Sound of One Hand Killing