The two-episode Sebastian Bergman has now finished on BBC4. (Next week see the repeat of Spiral series 2 in the now traditional "foreign crime" slot.)

However the first in the Sebastian Bergman series written by (duo) Hjorth Rosenfeldt, originally to be called Dark Secrets (the Swedish title is The Secret), and now retitled as Sebastian Bergman, is available to buy now on Kindle. The print version will be available on 5 July.

I haven't watched these episodes yet (surprise) but it seems that the first episode was based on this book and the second on the second book in the series, The Disciple (not yet available in English). 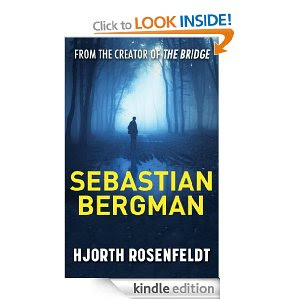 An electrifying Swedish international bestseller - the first in the Sebastian Bergman series. Now a hit BBC4 TV drama starring Rolf Lassgard, the original WALLANDER, as Bergman.
Sixteen-year-old Roger has vanished. Days pass and Västerås Police do nothing, blaming his disappearance on teenage antics. Then Roger's pale, mutilated body is found floating in a shallow pond, his heart missing, and the experts descend.
They need Sebastian Bergman. Top criminal profiler and angry, self-destructive mess, Bergman is no stranger to secrets. Desperate for access to police files, he plays along, until the brittle web of lies and deception seizes his full attention.
But Roger had his own secrets - dark secrets that are tearing apart the very fabric under which they all survive . . .
A page-turning, atmospheric thriller to rival the very best of Jo Nesbo, Henning Mankell and Stieg Larsson.
The electrifying thriller from the writers of BBC4 Swedish TV drama SEBASTIAN BERGMAN and the creator of the hugely successful series THE BRIDGE.
Posted by Karen (Euro Crime) at 10:33 am

Thanks! I haven't seen the Sebastian Bergman eps either (equal surprise) but I'll look out for this book.

I love nordic crime novels and tv series, but this series imho was mediocre at best. I was very disappointed with the script and the leading actor.