Review: Bryant & May Off the Rails by Christopher Fowler (audio book) 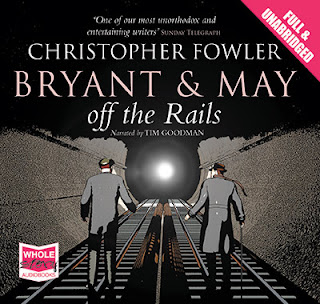 Bryant & May Off the Rails is the eighth in this series which features London's Peculier Crime's Unit (the PCU) headed up by London's two most ancient detectives Arthur Bryant and John May. Fast friends but with completely different ways of working.

Off the Rails pretty much follows on directly from the tragic end to On the Loose. The PCU have one week to find the elusive killer, Mr Fox, a chameleon who is drawn to King's Cross Station. If they don't solve the case then they'll be shut down.

A second case is presented to them when a young woman is pushed down a flight of stairs in King's Cross Station and a sticker is left on her back. This sticker leads the team to the Karma bar and on to a house in Bloomsbury full of students. When one of the students impossibly disappears off a late-night underground train then pressure is increased on the remaining students as Arthur becomes convinced one of them is behind the disappearance.

The fascinating history of the London Underground is imparted to the listener via Mr Bryant and the security team at King's Cross. All sorts of legends and rumours as well as hard facts are presented and of course there's a field trip down there by Bryant and May. After much surveilling of suspects and attempts at magic tricks by Arthur, all routes finally lead to King's Cross in a dramatic ending where murder is thwarted by a most unlikely source.

This is another good entry in this innovative and informative series which mixes history with laughs. There is a late scene with "Acting Temporary Head of the PCU" Raymond Land which made me snort loudly on the train, delivered in such a dead-pan way by the always excellent Tim Goodman. Land also makes some attempt to clear up how old the two senior detectives are as he reckons that Arthur has moved the first case, Full Dark House, back by 15 years. Arthur disputes this so we are none the wiser.

Christopher Fowler is possibly the UK's answer to Fred Vargas, both take events which appear to be supernatural and provide rational explanations and both Bryant and Vargas's Adamsberg have very unorthodox ways of getting to the truth.


Read another Euro Crime review of Bryant & May Off the Rails.

More reviews of Christopher Fowler's books can be found on the Euro Crime website.
Posted by Karen (Euro Crime) at 8:59 am

I think the comparison with Vargas is a good one. It hadn't occurred to me, but on the basis of the one Fowler I've read, and the several Vargases, I agree that they have more than a little in common.

I'm just reading An Uncertain Place, and I completely agree that there a lot of similarities between Fowler and Vargas - mainly the large cast of eccentrics, but also the supernatural tinge. I was thinking that Vargas was lucky Fowler hadn't already 'done' Highgate Cemetery. I wonder if they read each other?

Karen - I'm another who wouldn't have thought of this comparison without your mentioning it. You make a very good point though! And the history of the underground system that runs through this sounds really interesting.

I love Christopher Fowler's Bryant & May books, but haven't yet tried the audiobooks.