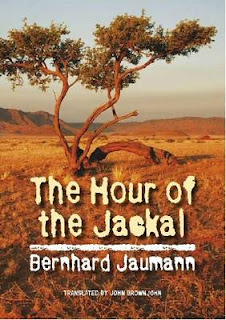 The Hour of the Jackal by Bernhard Jaumann, translated by John Brownjohn was published by John Beaufoy Publishing Ltd on 1 August. (I'll be adding it to the International Dagger eligibles list.)

The official synopsis gives little away:

Namibia in January. In the heat of a summer's evening in the affluent Ludwigsdorf suburb of Windhoek, a gardener is cold-bloodedly murdered while children splash and play in the swimming pool.

However there is more detail at New Books in German.

The publicist who has brought it to my attention says that: "Based on the politics surround the notorious assassination of Anton Lubowski, this new title is the winner of the 2011 German Prize for Best Crime Fiction".
Posted by Karen (Euro Crime) at 8:12 pm

Thanks, Karen, I'll definitely give this one a go as I have found it hard to get on with the German crime fiction I've read so far, with the exception of Ingrid Noll and The Sinner by Petra Hammesfahr. It sounds a bit different from the usual from the little known so far!