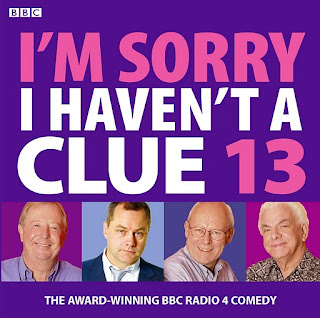 AudioGo have kindly been sending me crime and Doctor Who cds to review and this one was included in one of the packages.

I've heard of the show - it's a Radio 4 institution - but never listened, but I loved the vaguely similar tv show, Whose Line is it Anyway, with Clive Anderson which aired in the late '80s/'90s.

This package comprises two cds with four, forty-minute shows. The team visit different venues: Southampton, Carlisle, London and Chichester in this collection and each show begins with "Jack's Introduction" in which Jack informs and insults the residents of the town. That's followed by a selection of word-play rounds, occasional improvisation rounds and some "singing"/"musical" rounds.

The results are hilarious though the humour can be a bit rude - I've just noticed on the back of the cd case that "some listeners may find the content offensive". The sessions were recorded in 2009 and any of the current affairs mentioned sound fairly relevant still. There's one prescient skit where two of the team have to pretend to be in a coalition and the other team have to guess what's wrong with them.

Really the only negative thing I can say is that - where can you listen to it without getting stared at? I nearly fell off the treadmill - so exercise is a no, no. Walking outside, be prepared for sidelong glances and the train's not any better. So it's probably best to listen to this in the privacy of your own home!

You can listen to part of one of Jack's introductions at the AudioGo website.