Euro Crime has a five copies of A Noble Killing by Barbara Nadel to giveaway. To enter the draw, just answer the simple question* and include your details in the form below.
*The answer can be found in the Bibliographies section.

This competition is open to everyone and will close on 31 January 2011.
Only 1 entry per person/per household please.
(All entries will be deleted once the winner has been notified.) 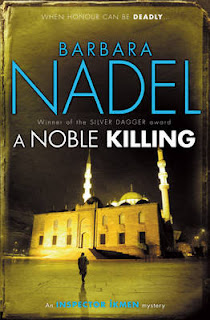 The brilliant new Istanbul crime novel from Barbara Nadel delves into the shocking world of honour killing Turkey: the police are called to the scene of what seems to be the honour killing of a young girl. Burnt alive, she is not the first girl to suffer such an horrific death in Istanbul. Further investigations by Inspectors Cetin Ikmen and Mehmet Suleyman reveal that the girl had a secret boyfriend who has now disappeared. He and the girl's family are prime suspects, even though forensic evidence is scant. Why does the family, in common with other families of girls immolated in the city, now appear to be broke? There are also links to an infamous local gangster. Religion, organised crime and the lengths some people will go to in order to conform, come together in a tragic story of violence in a divided and changing society. And Mehmet Suleyman is on the verge of making a mistake that could ruin his career...