I mentioned E C R Lorac a few short months ago after having read Two Way-Murder. I've since read Crossed Skis under her pseudonym Carol Carnac, and These Names Make Clues.

These Names Make Clues was first published in 1937 and republished just last September. 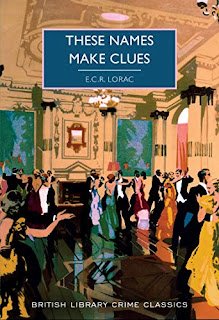 ‘Should detectives go to parties? Was it consistent with the dignity of the Yard? The inspector tossed for it—and went.’Chief Inspector Macdonald has been invited to a treasure hunt party at the house of Graham Coombe, the celebrated publisher of Murder by Mesmerism. Despite a handful of misgivings, the inspector joins a guestlist of novelists and thriller writers disguised on the night under literary pseudonyms. The fun comes to an abrupt end, however, when ‘Samuel Pepys’ is found dead in the telephone room in bizarre circumstances.Amidst the confusion of too many fake names, clues, ciphers and convoluted alibis, Macdonald and his allies in the CID must unravel a truly tangled case in this metafictional masterpiece, which returns to print for the first time since its publication in 1937.

I enjoyed this very much, especially the first half at the treasure hunt party and I loved this sentence taken from the second half of the book, when a character (name omitted) gets lost and asks for help:

The errand boy thus addressed gave directions which involved too many "firsts on your right and thirds on your left" for XXXX to follow, but with a general sense of direction culled from the complicated instructions he turned down a narrow suburban road and was rewarded shortly by the sign of that gallant gentleman "Major Road ahead".

My favourite of the three I've read so far though is Crossed Skis, set partly in Austria and giving an enormous flavour of post-war life and travel, as well as a good puzzle.

Chief Inspector Macdonald returns in February 2022 in Post After Post-Mortem. In the meantime I hope to catch up with more of the British Library Crime Classics collection and listen to more Shedunnit podcasts, in particular a recent one which revisits E C R Lorac.